The Jacques Cartier Bridge, dating back to 1930,   is a steel truss cantilever structure over the St Lawrence River in Montreal, Quebec. Its illumination was the centerpiece of the city’s 375th and Canada’s 150th anniversaries, with 2,800 light fixtures that will light up the lively Old Port every night for the next ten years.

The Jacques Cartier Bridge has been a cityâ€™s icon for close to a century, and this project gives it a new life at night. Thanks to intelligent programming connected in real-time to Big Data and social media networks, the bridge translates the digital pulse of the city into a series of data visualizations that constantly change in sync with Montrealâ€™s seasons, weather, traffic, news and social media trends. It is considered to be the most connected bridge in the world, united with the city and its citizens.

The $39.5 million project was a challenging one for the 250+ participants from all professional backgrounds who worked on it for more than two years (engineers, creatives, lighting designers, project managers, programmers, rope access technicians, steelworkers, electricians, traffic officers and more). The art concept was created by Moment Factory, a Montreal-based multimedia studio whose productions span the globe, in collaboration with six Montreal multimedia and lighting studios â€” Ambiances Design Productions, ATOMIC3, Ã‰clairage Public/Ombrages, Lucion MÃ©dia, RÃ©alisations, and UDO Design. The Jacques Cartier and Champlain Bridges Inc. provided project management, while the engineering work was done by a WSP-AECOM consortium and Pomerleau installed the lighting system that features lighting technology by Lumenpulse and Philips Lighting.

A dynamic lighting of the exterior faÃ§ade is directed outward toward the surrounding metropolis, while a soft lighting is directed inward toward the heart of the structure, minimizing light loss and distractions to vehicles. There are 53 data points in 11 categories collected every day in real time, enough to create a constantly changing light show at night, for 52 minutes each hour. Some of them are located on the bridge, as there are sensors installed for tracking vehicle, bicycle and pedestrian traffic, as well as wind speed, wind direction, and precipitation levels.

Thanks to a 365-color calendar, the base colors change gently with the seasons, from a spring green to a summer orange, a fall red, and finally an icy winter blue. The bridge also pulses with the cityâ€™s social conversations as tracked on Twitter in real-time. Depending on how often Montreal-related hashtags are liked and shared, the intensity, speed and density of these light fragments changes, while viewers can send a tweet directly to the bridgeâ€™s own dedicated hashtag (#illuminationMTL), creating a unique colored spark. 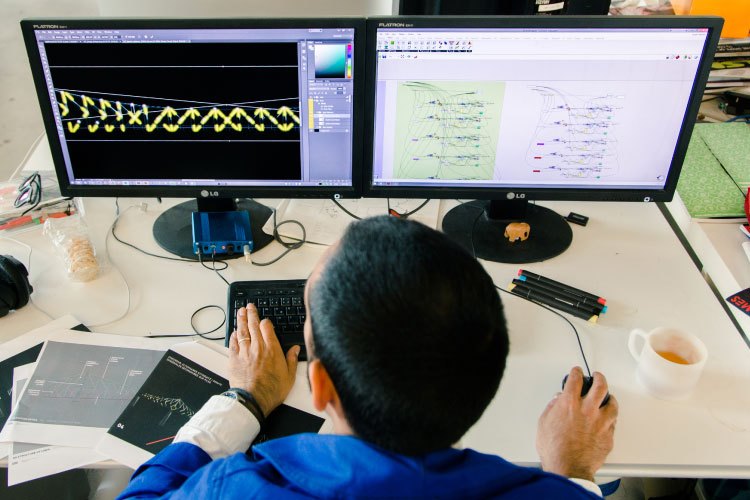 More than 250 participants from all professional backgrounds worked on the bridgeâ€™s lighting for more than two years. Photo: Moment Factory 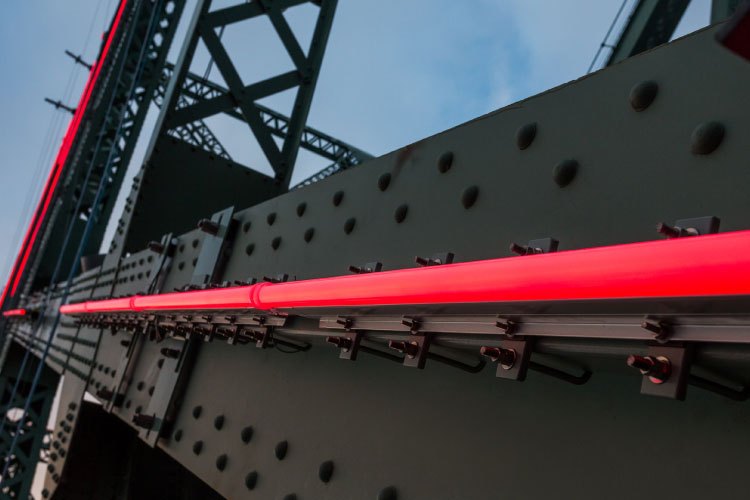 A combination of projectors and tube lighting illuminates the steel superstructure to reflect the activity of the city. Photo: The Jacques Cartier and Champlain Bridges Incorporated (JCCBI) 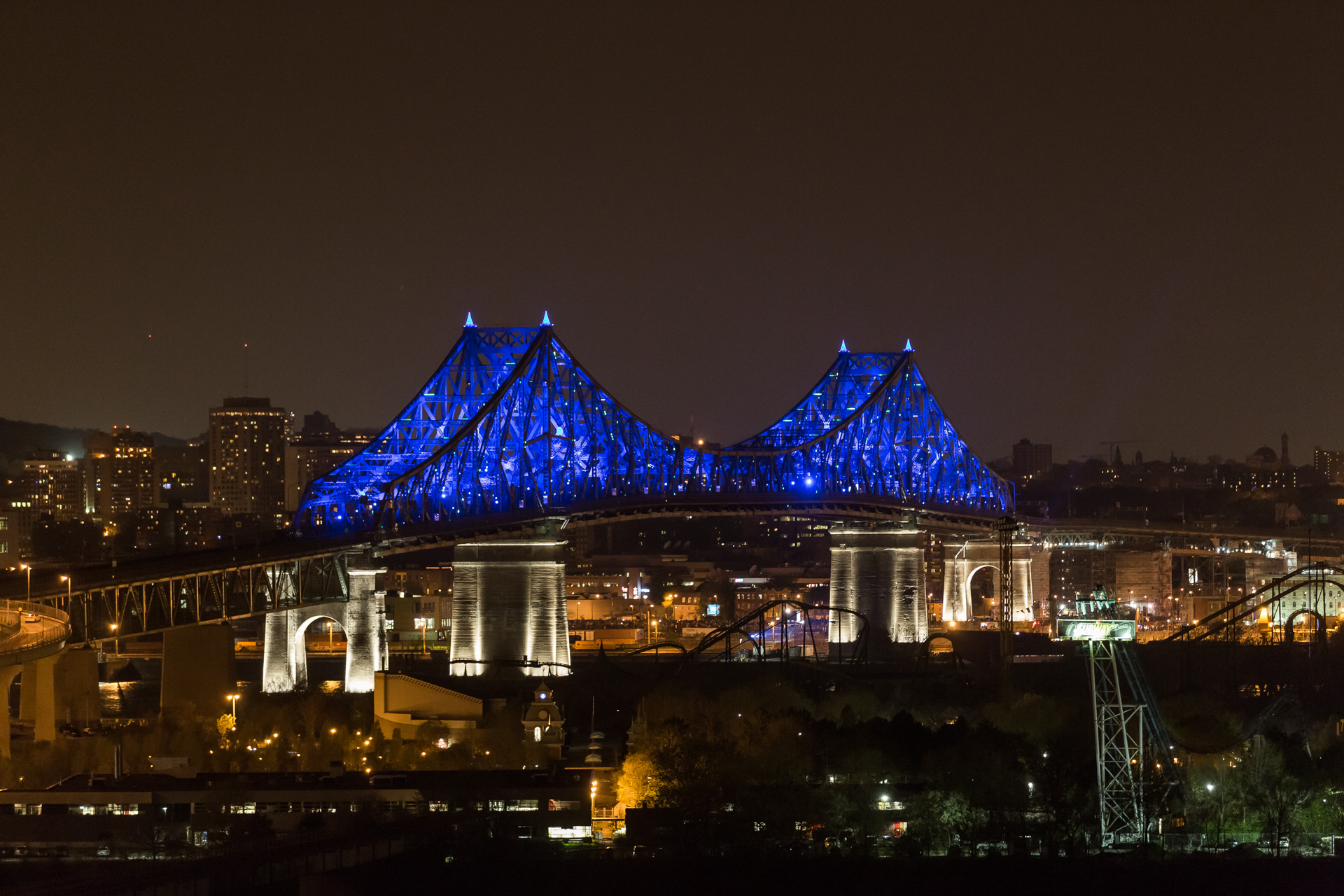 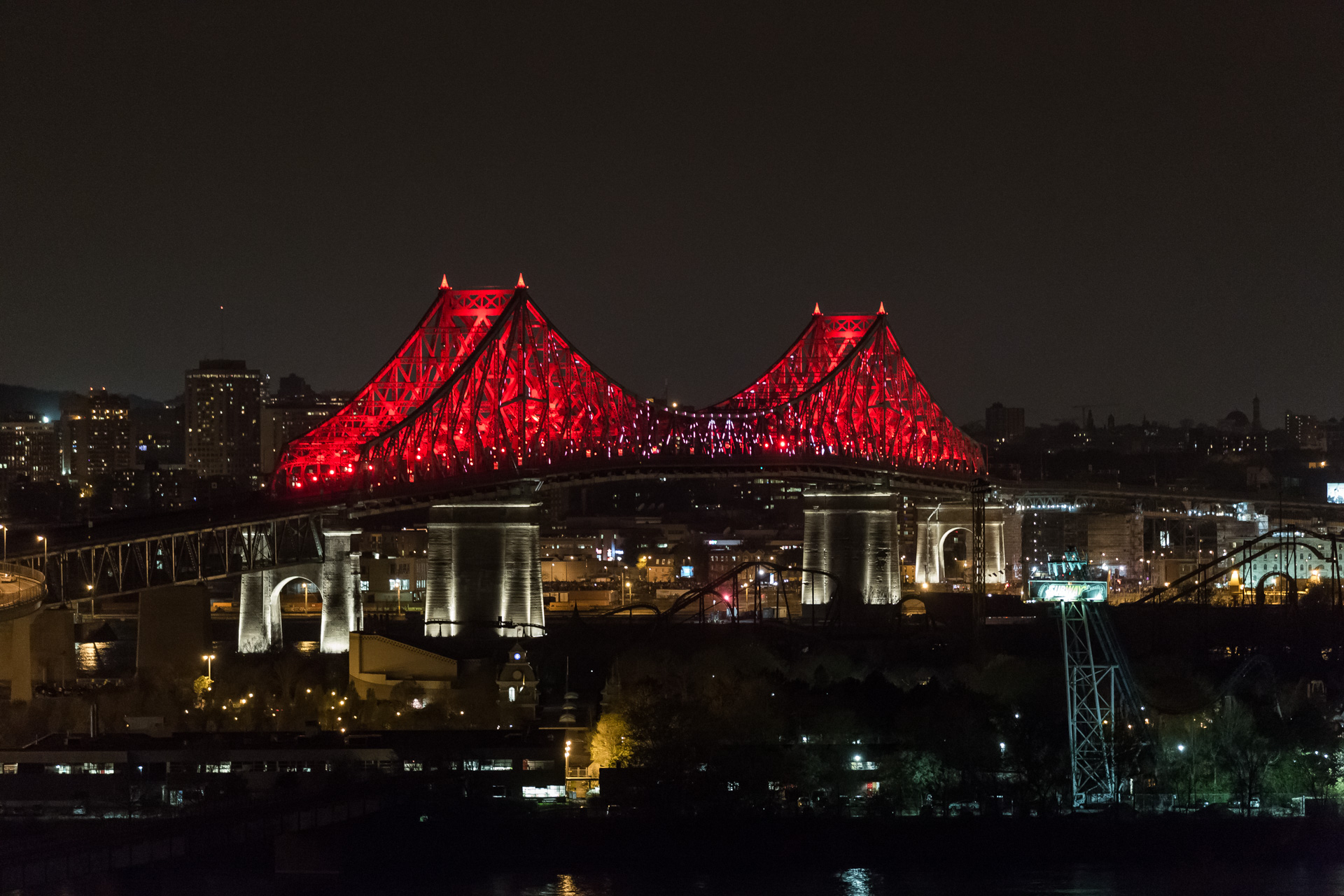 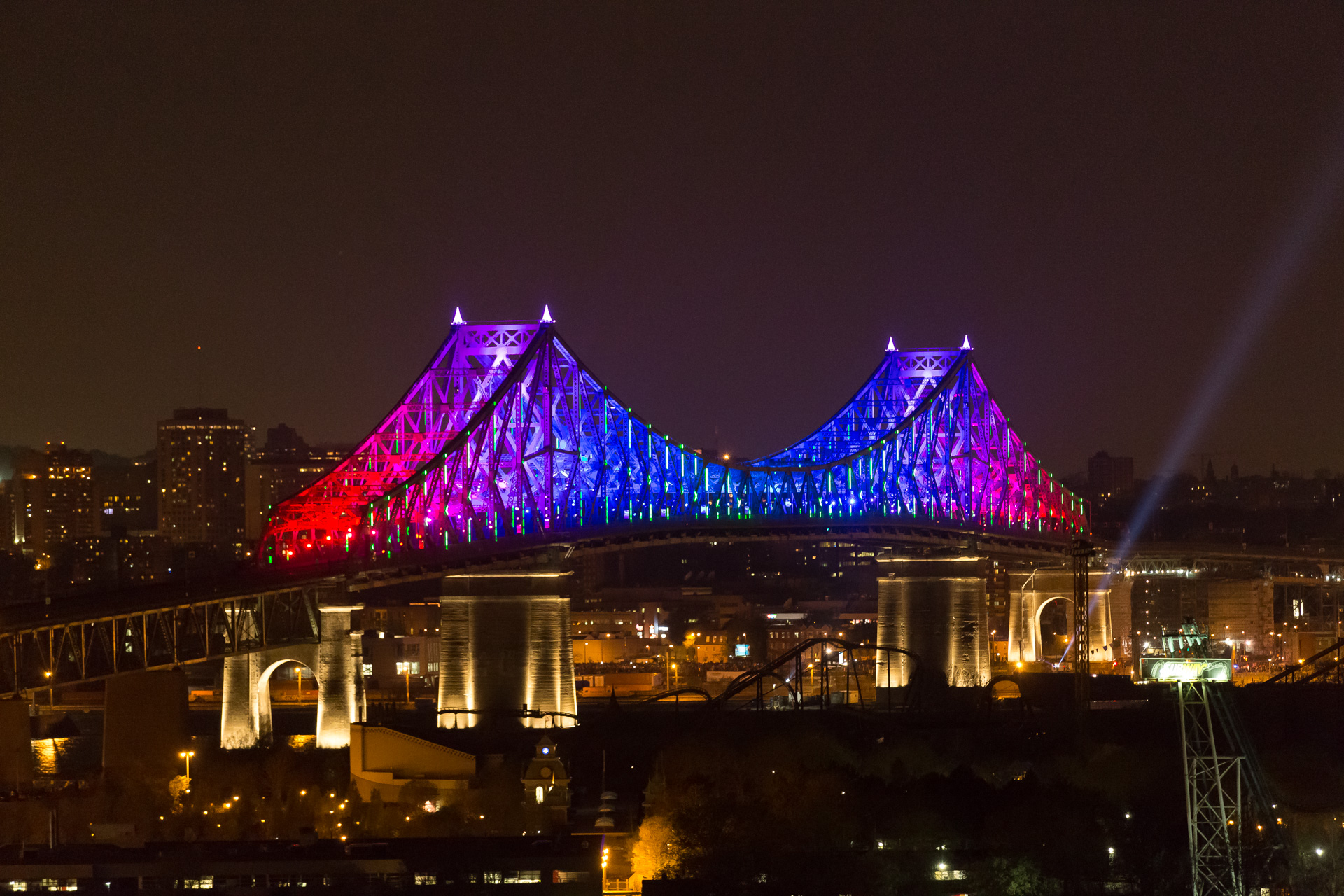 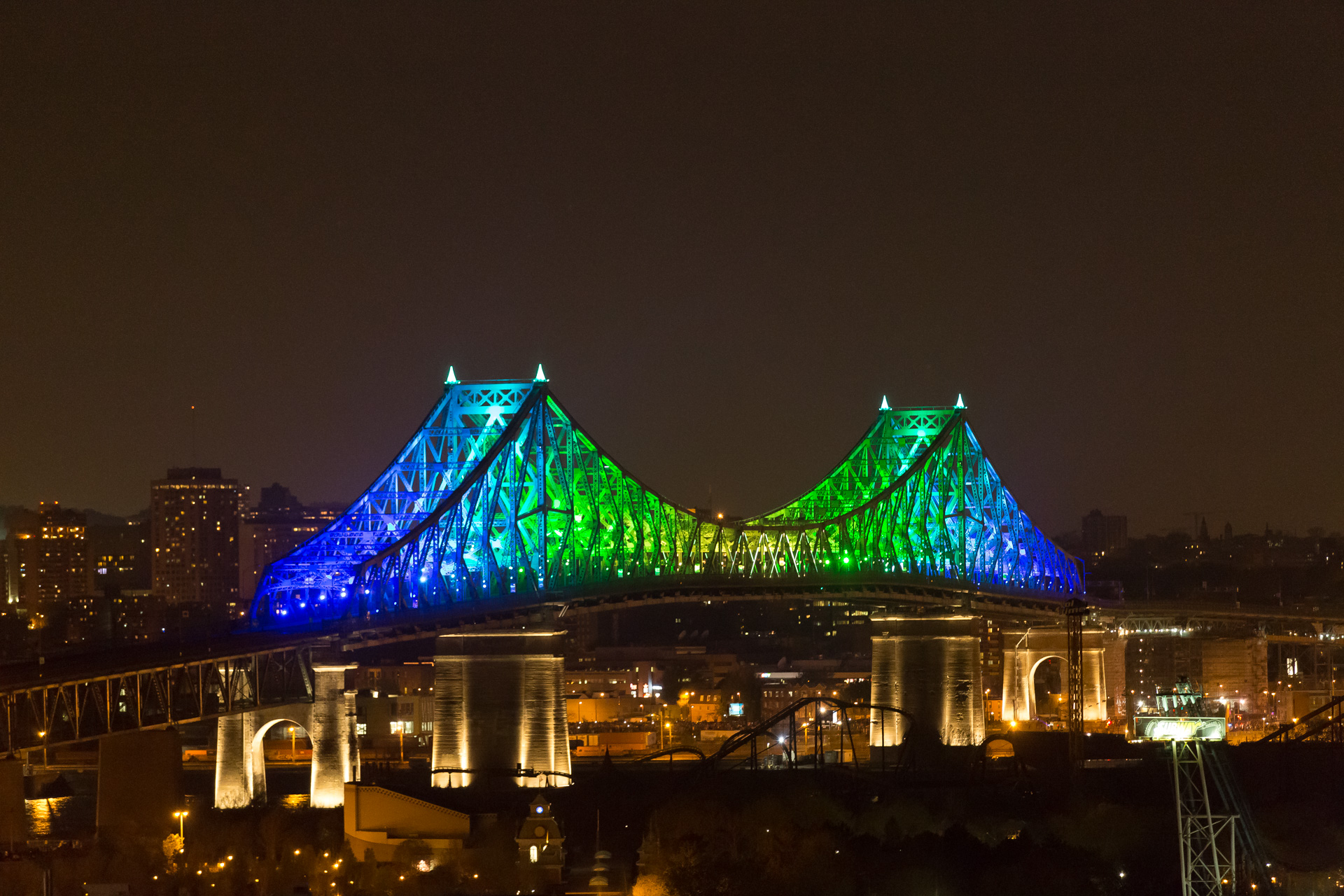