Could linking Scotland and Northern Ireland by a bridge become a reality?

Such a project is ‘feasible’ and has ‘exceptional’ business potential, says top architect

Plans to build an automobile and train connection between Scotland and Northern Ireland were first announced back in 2009 but no construction works have started since, as feasibility studies into building a bridge or tunnel were never financially supported. Reacting to  Boris Johnsonâ€™s proposal of building a bridge between England and France, Professor Alan Dunlop, one of Scotlandâ€™s leading architects, now claims that a bridge between Scotland and Northern Ireland  would be a better prospect and that it is not only â€œfeasibleâ€ but could create a â€œCeltic powerhouseâ€. The 25-mile link would cost about Â£15bn, a fraction of the estimated Â£120bn for the English Channel bridge and could â€˜act as a catalyst for developing further links between the two islandsâ€™. According to Prof. Dunlop, the new structure would boost the Scottish and Irish economies and help solve any longer term disputes over the re-emergence of an Irish border post-Brexit. He told BBC Radio Scotlandâ€™s John Beattie Show: â€œIt would be a wonderful thing â€“ a connection between Scotland and Ireland. We share a lot of history together, similar ideals. The business potential is exceptional, the chance of actually really making an investment in what would be the true north. Westminster politicians talk about the northern powerhouse, but theyâ€™re really only talking about Manchester, Liverpool, Sheffield. This would be an investment in what would be, I think, the true North.â€

The placement of a suspension rail and road bridge -like the one connecting Denmark and Sweden across the Oresund Strait- could be built from Portpatrick to Larne, although the Beaufortâ€™s Dyke, a 300-metre deep sea trench off this stretch of the Scottish coast, would pose a challenge to engineers. Technically, it would be easier to build a bridge between the Mull of Kintyre and Torr Head on the Antrim Coast. These locations are just over 12 miles apart and the sea is shallower, but a four-hour drive to Mull of Kintyre from the central belt would be needed, meaning that it might not attract a sufficient number of vehicles. 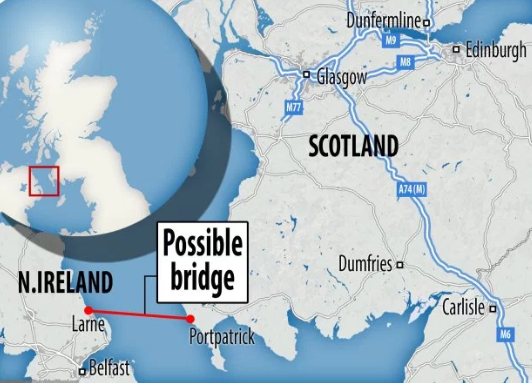