Bridges have been part of engineering features since ancient times. Through the ages, their design and capabilities evolved and can currently span across challenging and rough terrains.

Following the preceding story, here are some more of the scariest bridges that people can cross worldwide:

The Carrick-a-Rede is a rope bridge located in Northern Ireland. The passage links the mainland with the small island of Carrickarede. The bridge that is elevated 30 meters above the sea and spans a 20-meter opening, is made of wooden planks and rope. Despite its small length, the oscillation from movement is capable of making the passing a scary experience. 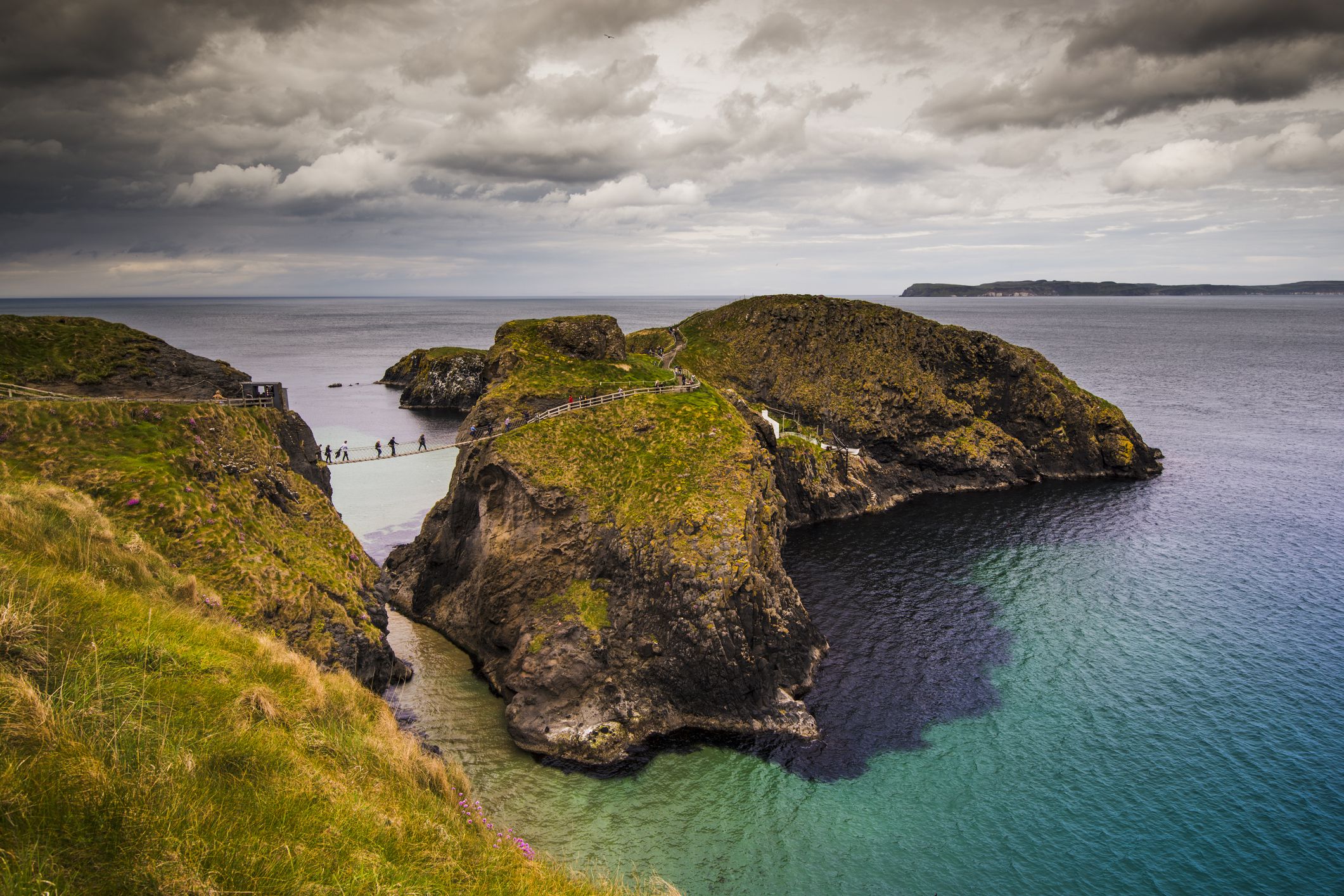 The Puente de Ojuela is a suspension bridge located in the state of Durango, Mexico. It stretches over a steep valley measuring over 300 meters. What is surprising is that the facility links what is now a ghost town with an abandoned mine. The view is spectacular yet the route is frightening. The bridge was constructed back in 1898 and was repaired later in 1991. 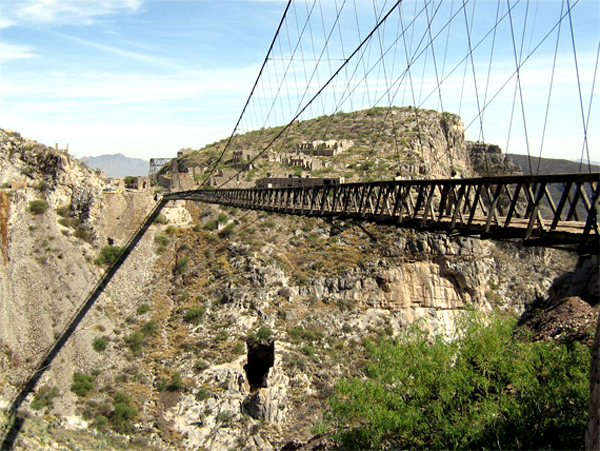 The Lake Pontchartrain Causeway used to be the longest bridge over water worldwide, measuring 38.35 kilometers before it was overthrown by the Jiaozhou Bay Bridge in China. The length of the bridge is immense and makes people lose sight of the mainland for almost a 13-kilometer distance. There are several reports about people experiencing fear when driving across the passage. Sometimes, officials have interfered and have escorted motorists to the end of the bridge. The facility was once used as a landing airway for a plane that ran out of gas. 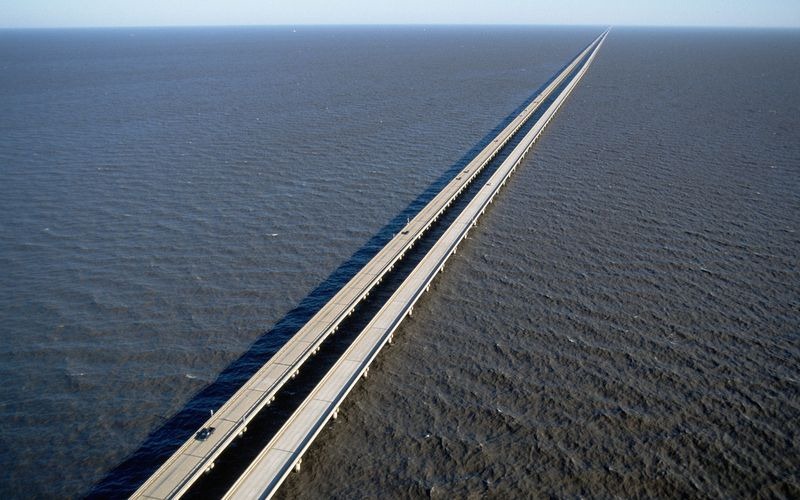 The Kuandinsky Bridge is located in eastern Siberia and stretches over the Vitim River. The structure is reported to be one of the most dangerous bridges in the world. The 570-meter crossing is only 2 meters wide and has no lateral safety features to prevent a vehicle from falling down to the river. Moreover, the steel structure has been covered by wooden planks that can become slippery when wet or frozen while high winds frequently struck the region. 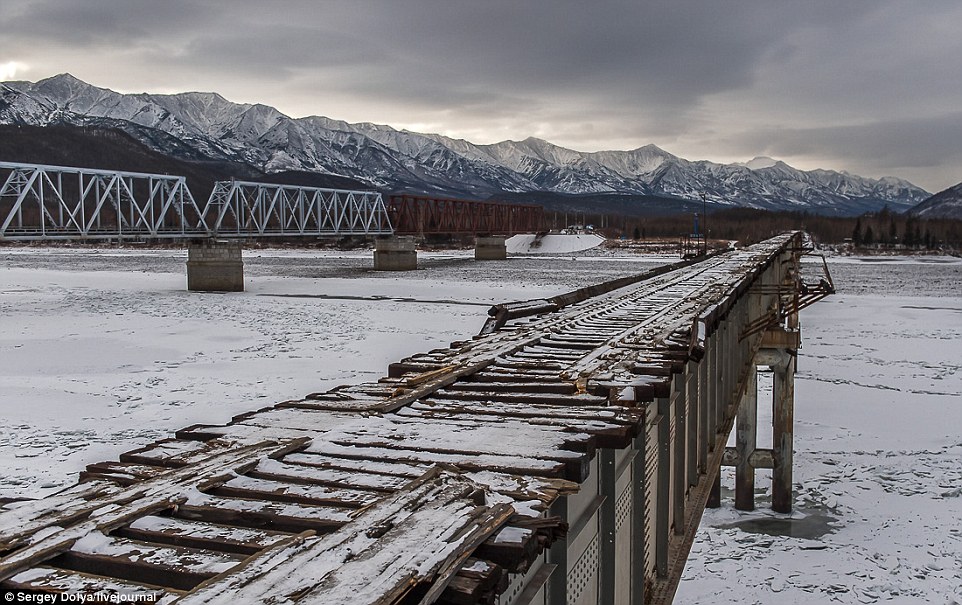 Being probably the scariest crossing of the list, the Plank Road in the Sky is located in Mount Hua, one of the Five Great Mountains of China. The passage is not the classical example of a bridge structure but more of a very narrow path of wooden planks bolted to a cliff about 600 meters above the ground. The cliff is near-vertical and people have to walk on the crossing as it is part of a hiking trail. Visitors are chained to the rock of the cliff as there are no lateral barriers. "No one was willing to move out from the edge of the cliff, so we were forced to step behind the scared locals. With one hand on the chain, we would swing out over the edge and continue on. It was exhilarating," a traveler, stated. 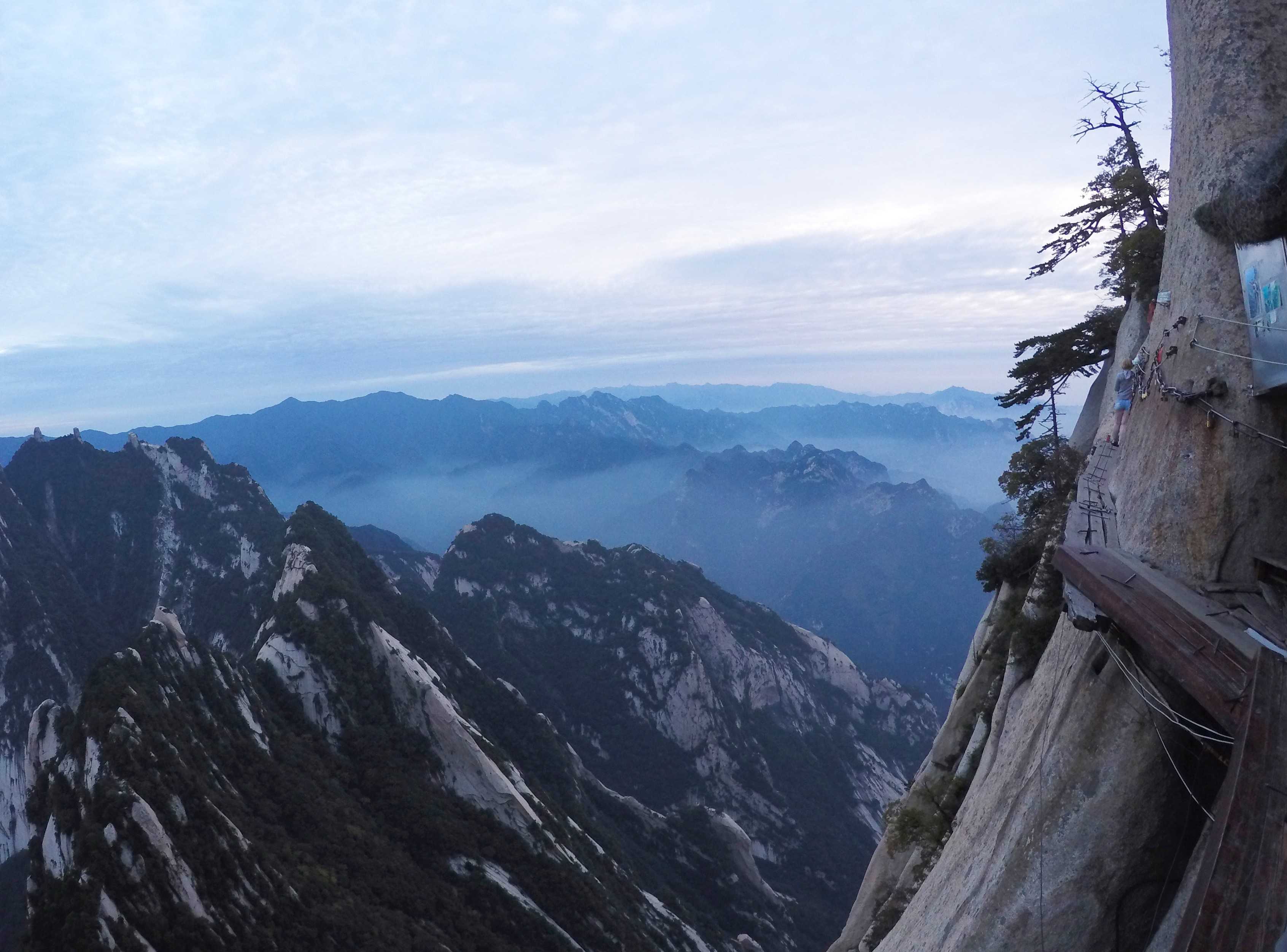 The Plank Road in The Sky, Mount Hua in China. Credits: Rappler/Pauline Buenafe

The Cloud Bridge is located in Wolchulsan National Park, South Korea. It is a 52-meter length suspension bridge that connects two mountain peaks. An impressive view of the park and of the surrounding environment is provided when crossing the structure, however, its uniqueness lies on its high inclination. The bridge leans at about 70° and climbing its 127 steps feels like moving through clouds, visitors have stated.

The structure is a 140-meter long bridge spanning across the Capilano River in Vancouver, Canada. It was built in the late 19th century and today serves as a tourist attraction accommodating more than 1.2 million people annually. At first, its ropes were made out of rough fabric but they were replaced by wires in 1903. The structure is flexible and oscillates when people cross it, making the path (that is elevated 70 meters above the river) rather frightening. 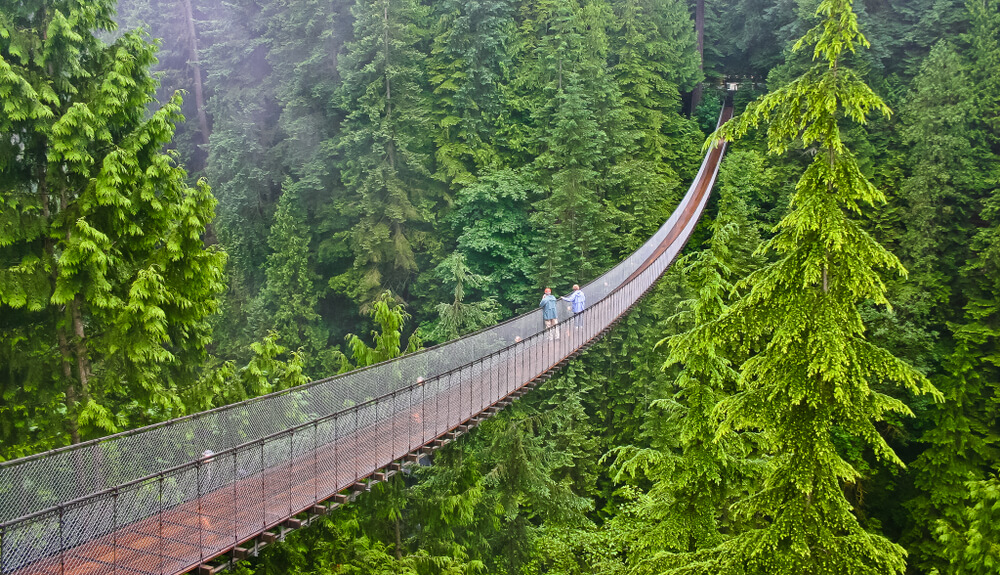 The Sidu River Bridge is located in the Hubei province of China. It is a 1220-meter length structure suspended at a height of 365 meters above the ground. The structure spans a canyon, connecting 2 mountaintops and is supported by 2 massive pillars. Its challenging construction began in 1989 and the facility opened 20 years later. The bridge is part of the G50 Huyu, a major highway in China. The steep canyon and the surrounding environment make the passage scary yet fascinating. 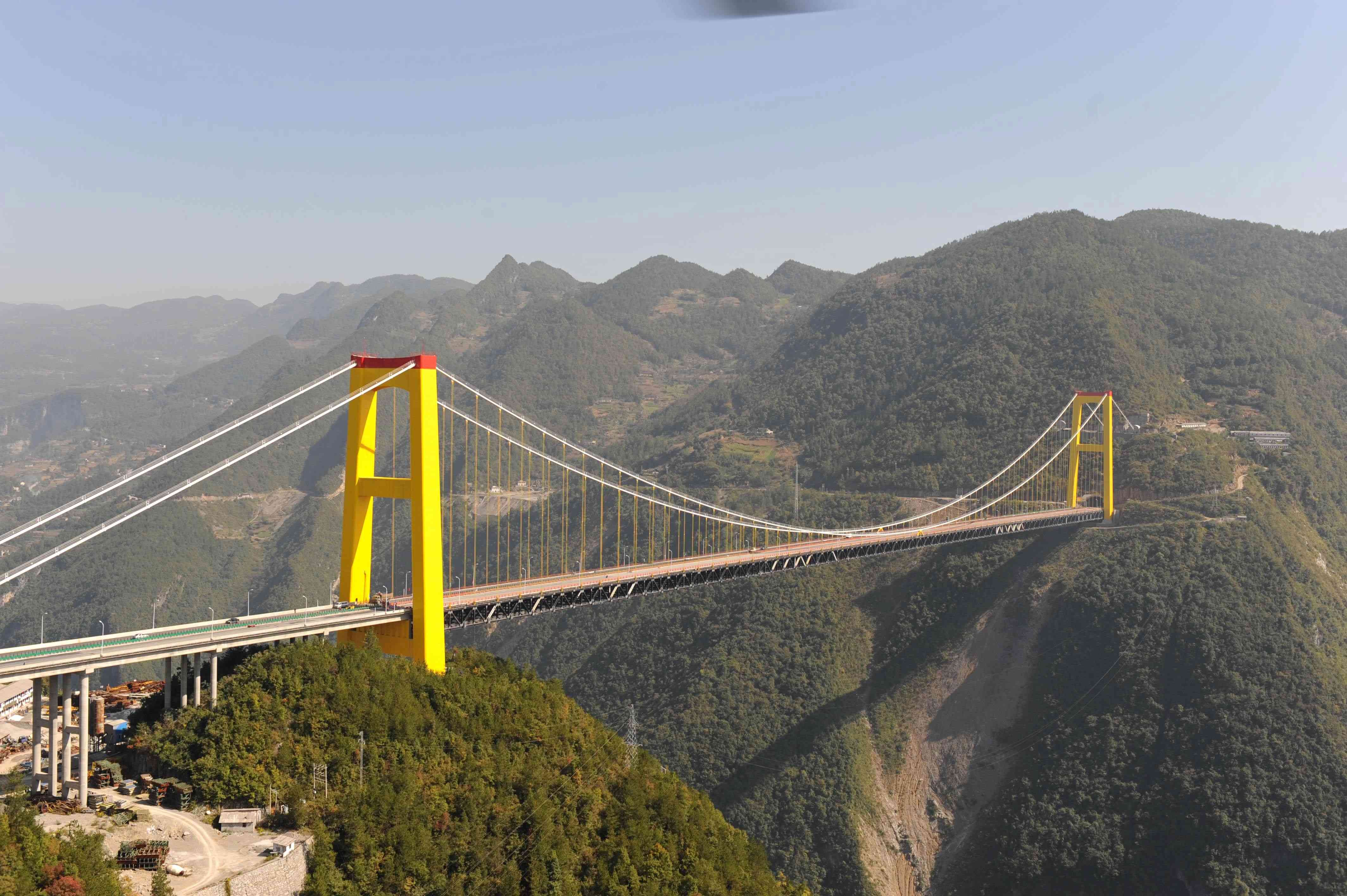 Notorious for being one of the most hazardous crossings in the world, the Hussaini Hanging Bridge crosses over a lake in northern Pakistan. People can cross the bridge on foot as its span consists of wooden planks, many of which are missing are the structure is poorly maintained. Moreover, its condition has significantly deteriorated probably since 2011 when a monsoon struck the region. Nevertheless, the facility and the beautiful landscape attracts hikers and tourists. “(The bridge) is extremely old and very narrow. Situated high above (the lake), it is missing many of the original wooden planks,” Kieron Nelson, a photographer that visited the site, mentioned. 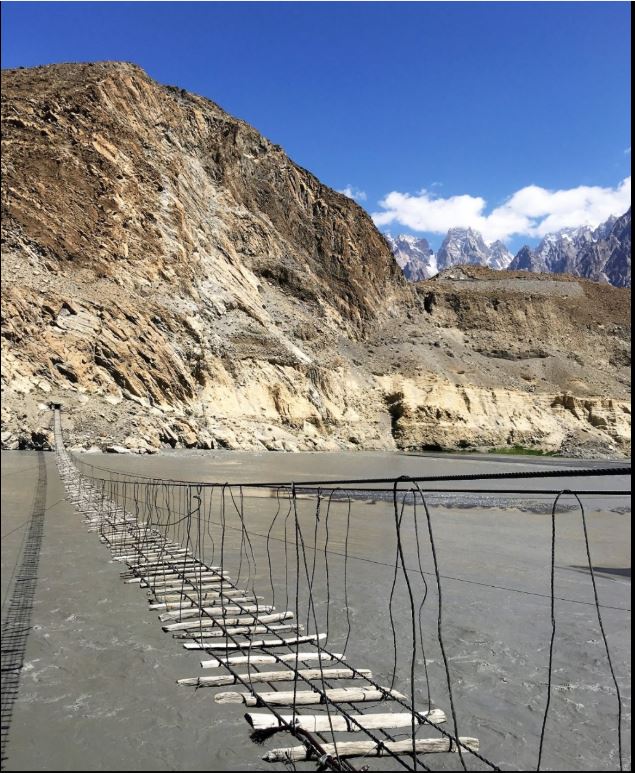 The Aiguille du Midi (meaning Needle of the South) Bridge is established at an elevation of 3810 meters above the sea level in the French Alps. The structure is a pedestrian passage that links two mountains. Despite its relatively small length, crossing the bridge is a breathtaking experience as the cliff is steep and high winds frequently struck the area. The scenery provides a view of Mont Blanc, the highest peak in Europe. 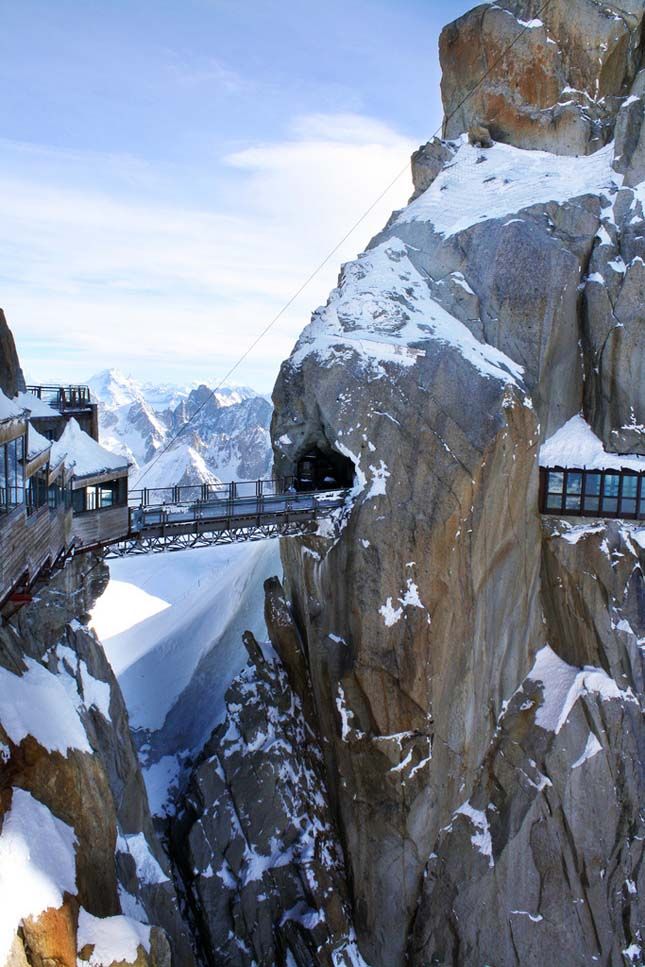