Forensic assessment of the causes behind the deadly collapse of Line 12 rail bridge in Mexico City is under way. The accident, which occurred near the Olivos station in the working-class neighborhood of Tláhuac, cost the life to 25 people, with dozens more injured. Understandably, the authorities and the public alike are looking for answers. Therefore, two reports by experts are currently being prepared.

From the first moments after the collapse, it was obvious that the horizontal girders that supported the train platform gave way. Sergio Alcocer, a researcher at the School of Engineering at the National Autonomous University of Mexico, believes that the structural failure could be caused by design faults, errors during construction and general wear and tear, factors that are not necessarily mutually exclusive. Similarly, Francisco García Álvarez, former president of the Mexican Association of Structural Engineering also stated to El Pais that no single factor can account for the collapse. Nonetheless, he is focusing on possible issues during construction, since he associates the mode of failure with problems in the assembly process rather than in the design or quality of the materials used. Since the two girders that formed the platform were connected at the middle of the bridge, García Álvarez sees that connection as the problematic one and points out that during construction welded joints at selected sections of the platform were checked rather than each one. Therefore, the critical joint might have not been checked during construction. Both Alcocer and García Álvarez rule out the possibility that the collapse was a consequence of the 2017 earthquake. Similarly, Fernando Zamorano, who is a structural engineer, also stated that poor execution methodologies are possible the reason behind the failure. “It did not fall from an earthquake or a natural disaster, but while fully operational,” he said to El Pais. 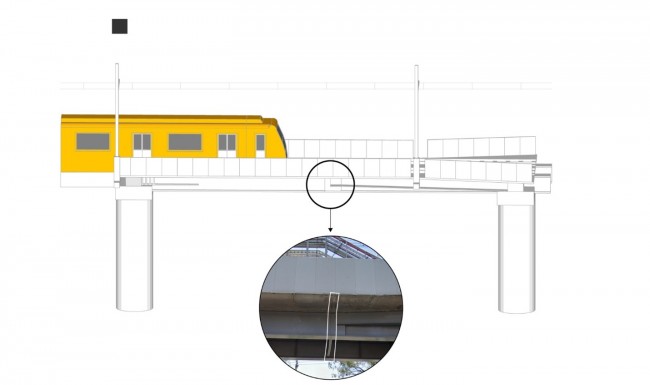 Line 12 of the Mexico City metro was inaugurated in October 2012, but has been closed down for maintance in several occasions; ex., in 2012, in March 2014, and in 2017, after the earthquake. During the latter earthquake 2017 event, the line suffered the greatest damage of all the lines in the city’s metro system, according to a Senate report. “The line had endemic problems from the start that will never be solved,” Jorge Gaviño, the then-director of the metro, said at the time.

In the past and near the location of the accident, locals had reported cracks in the structure. Uriel Perret, civil engineer at the National Technological University of Argentina, says that problems in sections close to the incident could have had severe repercussions at other parts of the bridge. “The images of cracked columns that people have shared on social networks are due to a compression rupture and that type of rupture would force the disabling of this stretch of metro, because it could cause a chain failure; a decompensation of the structure, as we have seen,” he says. “The girder on that column is also deformed and the weight is no longer supported in the same way as was calculated during the initial project.”

Forensic engineering experts will keep looking into the reasons of the collapse to explain the structural failure.

Part of a bridge collapsed in Assam's Baksa distr...

Mexico: Bridge collapses during its opening ceremony sending mayor and guests into river – at least 25 injuries

At least 25 people were injured, including the ma...