A new bridge construction method, which was introduced by structural engineers at the Vienna University of Technology in 2006, was applied on a bridge in Austria. The innovative concept of the method resembles a “closed” umbrella, which unfolds, achieving the final form of the bridge. The method is considered to be very cost-effective in terms of material usage.

The first application of the new method took place in a 100 meter long bridge crossing the Lahnbach in a time period between October 2019 and January 2020, while the second one was at the new 116 meter long bridge standing over the Lafnitz River in south Austria. Both bridges are part of the new S7 highway, a project under construction at the time. Initially, balanced cantilever method or incremental launching method had been considered for the construction of bridges, but the new balanced lift construction method qualified as its cost was estimated 30% lower than the other methods.

Thin-walled U-shaped prefabricated concrete hollowed elements were used for the construction of the bridge’s girders in order to be lightweight for the lifting procedure. The girders were constructed in a vertical position, using a taller auxiliary pillar as a guiding rail, as the height of the piers was short (8 meters). Each girder was 36 meters long and weighted 54 tones. The two girders were connected to each other with four tendons and linked with the pier with a vertical compression strut, located around mid-girder, which moved during the construction procedure. Hydraulic jacks were moving the compression struts while two lowering cables, running though the girders, remained in tension, resulting in the unfolding of the two bridge’s girders and the support struts like an umbrella, until the two bridge’s girders reach their final horizontal position. The gaps between the girders and the abutments were filled with suspended girders. Once the hollow girders reach their final horizontal position, they were filled with concrete to complete the structural components of the bridge achieving a monolithic structure. 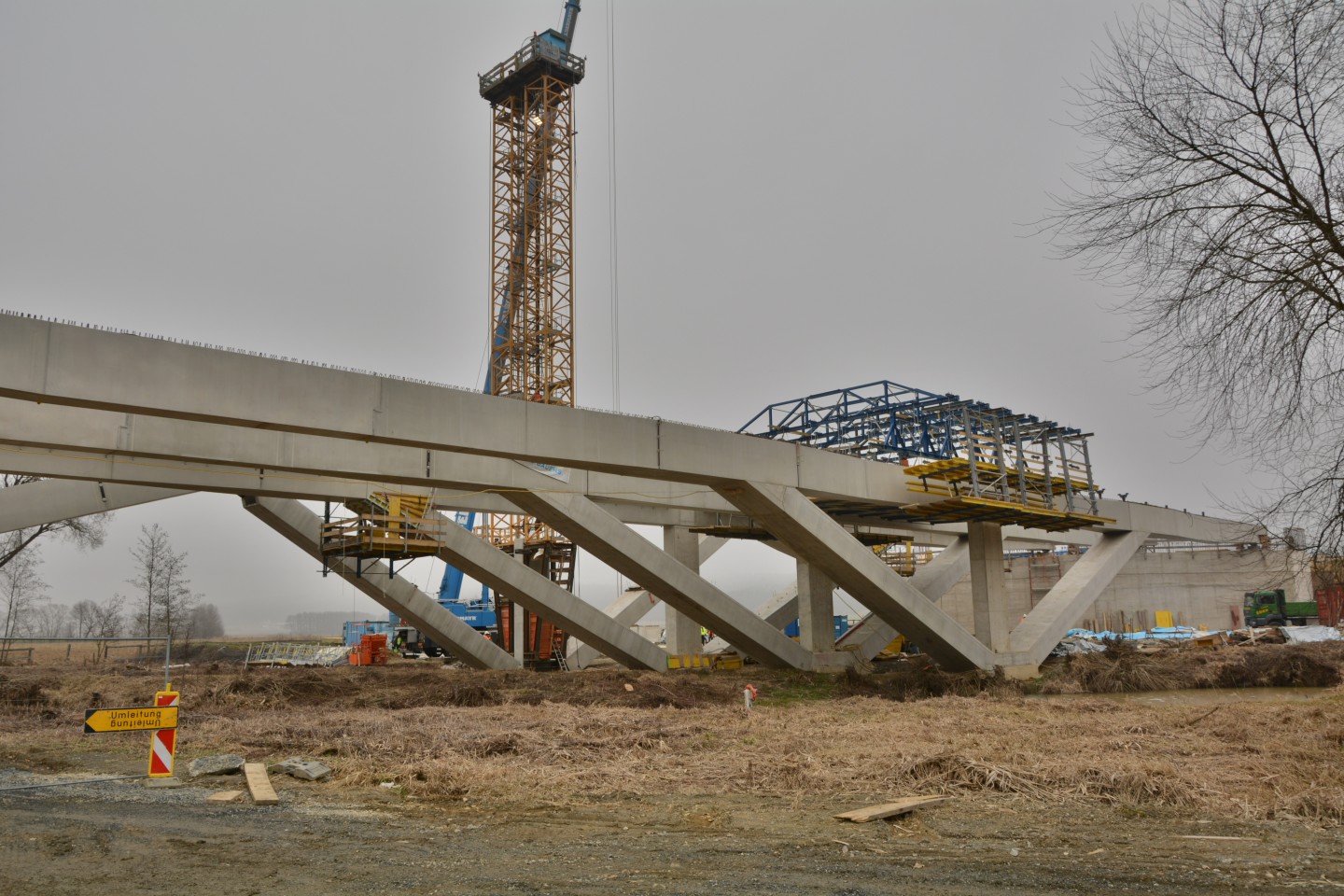 The bridge’s girders in their final position (Credits: newatlas)

The new bridge construction method provides the capability to achieve possible intended elevation of the bridge’s girders. An elevation of 0.6%, which was required for the span at the Lafnitz Bridge was achieved through two adjustment screws located at either side of the pier.

Construction of bridges with tall piers in relation to the bridges’ spans, via this method, is very profitable as there is no need to construct an auxiliary structure on top of the pier.

The new bridge construction method is considered to be more suitable for bridges with high piers, span lengths between 50 and 250 meters and at locations where extensive scaffolding and formwork are a deterrent.