A bridge collapsed at Wilton Bree, Wexford, Ireland and another bridge at Kilcarbry in Enniscorthy was "severely damaged".

The Minister of State with responsibility for the Office of Public Works has met with officials and engineers from Wexford County Council, after the county was hit by heavy flooding yesterday.

Minister Patrick O'Donovan travelled to Wexford today to view the damage and meet with council officials.

He said: "My heart goes out to those communities, families, and businesses that have been subjected to the widespread and devastating flooding across Wexford County this Christmas, including in and around Enniscorthy, but also in other communities such as Bridgetown, resulting from in excess of 90mm of rainfall falling over the county in less than 24 hours.

"The Office of Public Works and Wexford County Council have worked closely over many years to develop a robust flood relief scheme for Enniscorthy.

"When complete, this scheme will protect over 230 properties, including in areas of the town that have been flooded over this Christmas, at a budgeted project cost of over €50m.

"Once consent is granted for this scheme under the Arterial Drainage Acts, the OPW and Wexford County Council are ready and keen to progress to the construction stage of this badly-needed scheme, which it is estimated will take between 3 and 4 years to construct," Minister O'Donovan said.

Minister O'Donovan also said that the OPW will continue to engage with the local authority to offer support in identifying and funding appropriate flood relief works in these areas.

Meanwhile, residents at a high dependency HSE unit in St Helen's were among those rescued by emergency services yesterday afternoon after the home became flooded.

In the village of Bridgetown and surrounding areas, many homes were evacuated by lifeboat.

Wexford Civil Defence, the Coast Guard and RNLI participated in the operation.

Members of the Coast Guard were first on the scene in Bridgetown because a number of people living in the area are involved with the local unit, a spokesperson said.

The Coast Guard R117 helicopter was tasked shortly before 2pm, but it was forced to wait in the air for a time before it could fly into the worst impacted areas because of heavy rainfall.

Fethard RNLI and Kilmore Quay Coastguard were launched to help residents who had become trapped in their homes. They were taken out safely by lifeboat.

The crews also assisted motorists who had become stuck in the water or cut off due to severe flooding on some roads. 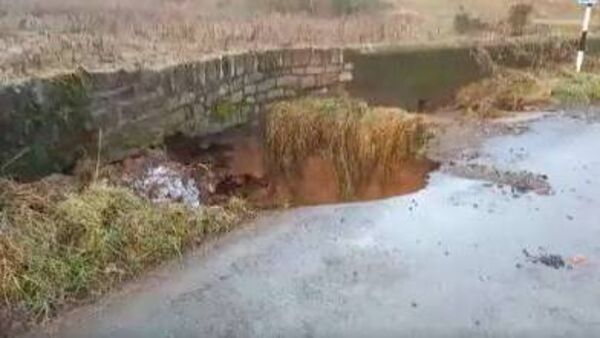