More than 50 children are among 135 people killed in Sunday’s bridge collapse in India’s Gujarat state, according to a list of victims published by state authorities on Wednesday.

Investigators are examining why the historic suspension bridge in the town of Morbi collapsed, sending dozens of people into the river below, in one of the worst public safety tragedies to hit the country in recent years.

Questions have been raised about how the narrow walkway collapsed and the role of an electrical manufacturing company tasked with maintaining the colonial-era structure, which only reopened to the public last week after repairs.

Some 200 people are estimated to have been on the bridge across the Machchhu River in the town of Morbi when it collapsed on October 30 at around 6:30 p.m. local time, according to Gujarat authorities.

According to figures released Wednesday, 54 children were among the dead. Most were under 10 years old – the youngest was a 2-year-old boy.

A 36-second video clip shared by the Morbi District Administration via CNN affiliate News-18 shows a large crowd of young men gathered on the bridge in the moments before it collapsed.

The video appears to show some of the men shaking the bridge from side to side before the structure gives way, plunging the people standing on it into the river. Gujarat Home Minister Harsh Sanghavi said on October 31 that a cable appeared to have snapped.

Photos from the aftermath show people gathering on the riverbank beside the mangled metal walkway, which hung at a sharp angle into the water.

Survivors and witnesses of the deadly incident described scenes of chaos. “People were hanging from the bridge after the accident, but they slipped and fell into the river when it collapsed,” Raju, a witness who gave only one name, told Reuters. “I could not sleep the entire night as I had helped in the rescue operation. I brought a lot of children to the hospital.”

Narendrasinh Jadeja, whose friend lost seven members of his family, including four children, told Reuters: “I cannot express how angry and helpless I am feeling.”

What we know about the bridge?

The Morbi Suspension Bridge was built during British rule around 1900 and is 230 meters (755 feet) long and just 1.25 meters (4 feet) wide. For decades, it’s been a popular tourist attraction in the riverside town, whose cobblestone streets carry the architectural legacy of colonial rule.

The bridge was closed for six months of renovations in April, according to the managing director of Oreva, a Gujarat-based electrical appliances manufacturer that oversaw the maintenance work.

At a reopening ceremony on October 26, the managing director told reporters the structure would not need any major work for “eight to 10 years,” according to a video of the event posted to social media.

What are authorities doing?

A five-person special investigation committee has been established to investigate the incident, Gujarat Home Minister Sanghavi said on October 31.

Search and recovery operations by hundreds of personnel from state and national disaster relief teams and the Indian military remain ongoing.

Nine people have been arrested and are being investigated for culpable homicide charges, state police said on October 31. All of the suspects are associated with Oreva.

What we know about Oreva?

Since the deadly incident, public scrutiny has turned to Oreva, a company based in Ahmedabad, Gujarat’s largest city. Oreva started out as a clockmaker before diversifying into electronics, according to its website, which describes the firm as the “World’s Largest Clock Manufacturing Company” and “one of the Major Brands in India.”

CNN has reached out to Oreva several times, but has not received a response.

What’s being done for the victims?

Indian Prime Minister Narendra Modi arrived at the site of the fatal collapse in Morbi on November 1. Following an aerial survey of the area, he was seen taking stock of rescue efforts underway as he stood at one end of the collapsed suspension bridge.

“Went to Morbi, which witnessed the horrific bridge mishap. Met the bereaved families and extended condolences. I visited the site of the tragedy and went to the hospital where the injured are recovering,” Modi tweeted after visiting a local hospital.

The Indian leader added that he met personnel involved with rescue operations and chaired a review meeting.

The Chief Minister’s Office of Gujarat tweeted that Modi had “assured them of all possible assistance from the government.”

Search and recovery operations continued on Tuesday as divers scanned the area for bodies.

Gujarat Chief Minister Bhupendra Patel said the state government would provide the equivalent of about $5,000 in compensation per family of the deceased and about $600 each for the injured. Cremations of the victims are expected to begin on November 1.

World leaders have paid tribute to the victims and their families in the wake of the tragedy. US President Joe Biden sent his condolences to those who lost loved ones during the collapse.

“Today, our hearts are with India. Jill and I send our deepest condolences to the families who lost loved ones during the bridge collapse and join the people of Gujarat in mourning the loss of too many lives cut short,” Biden said in a statement Monday.

“The United States and India are indispensable partners, with deep bonds between our citizens. In this difficult hour, we will continue to stand with and support the Indian people.”

“On behalf of the Chinese government and the Chinese people, I would like to express our deep condolences to the victims and extend our sincere sympathy to their families and the injured,” Xi said, according to CCTV. 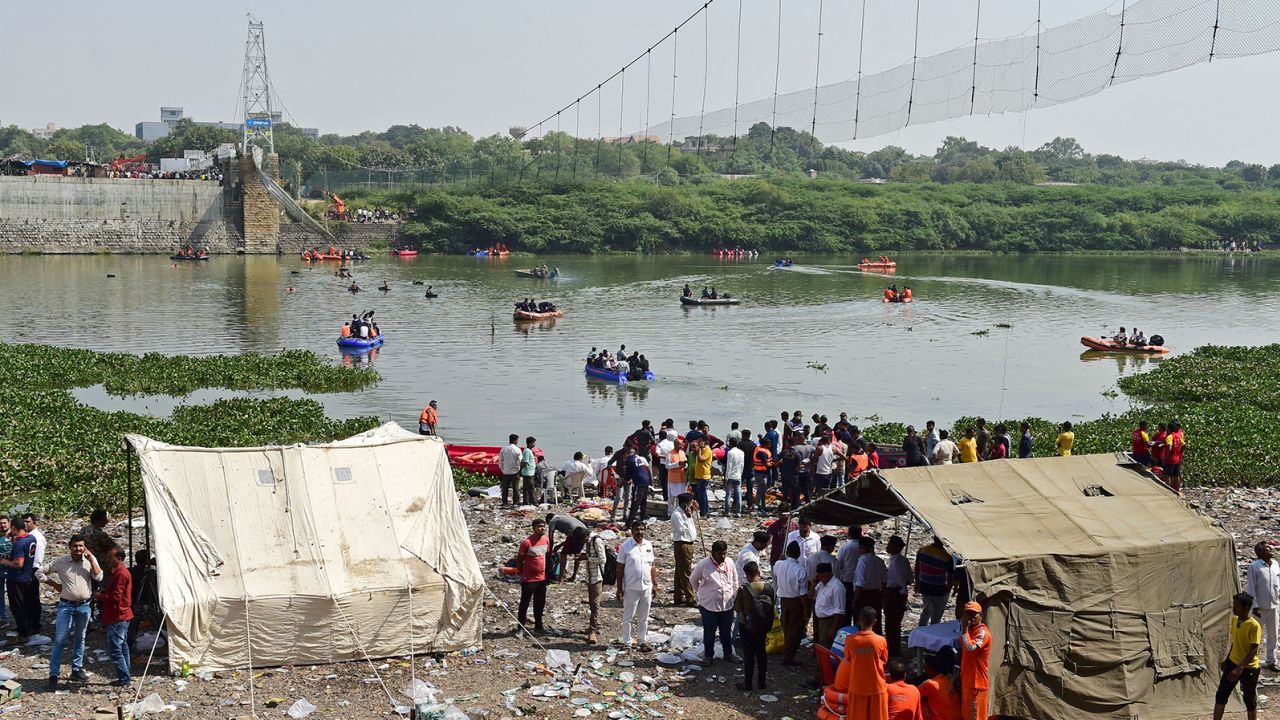 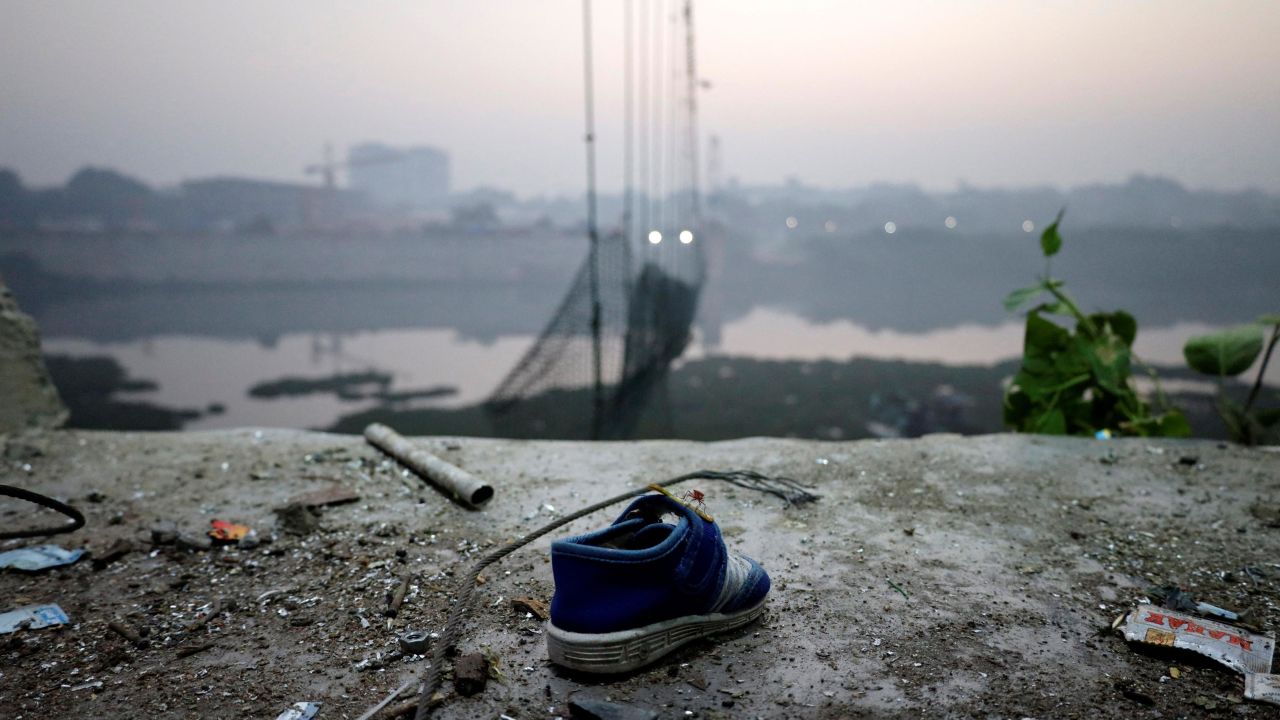