Closure of I-40 bridge in Memphis after cracks appear

The Tennessee Department of Transportation (TDOT) released photos of a crack on the Hernando de Soto Bridge. The structure is part of Interstate 40 crossing the Mississippi River at Memphis. The bridge was shut down for emergency repairs.

The structural system of the Hernando de Soto Bridge, which first became operational in August 1973, is an arched truss with a suspended deck. The crack, as seen in the released photos, consists of a complete fracture of three plates and a partial fracture of the fourth, bottom, plate of the bridge. According to Adel Abdelnaby, associate professor of civil engineering at the University of Memphis, the structural system of the bridge is not ideal, especially given its length. More specifically, Abdelnaby stated to CNN: “…because of this bridge's unique "M" shape, the entire truss (the arch of the "M") is above the deck and the pier is in direct contact with the bridge deck (which holds the highway). Because the arched "M" shape also requires the cables connecting the truss to the bridge to be shorter in places, this imposes high stress concentrations at the beams near the pier, specifically where this fracture was located.” 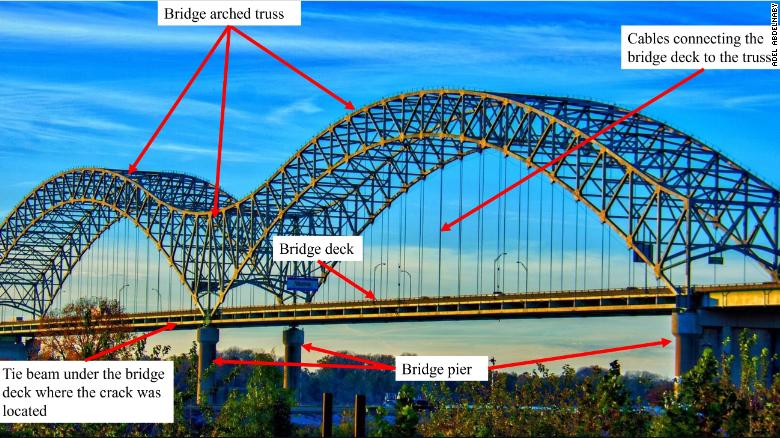 When Abdelnaby first heard of a crack found on the bridge, he initially though it would be the first phases of a fatigue-related crack development. Fatigue cracks, which occur when materials experience multiple cycles of stress, take a long time to develop, and therefore a routine inspection of a major bridge like the Hernando de Soto Bridge would typically uncover a fatigue crack in its formational phases. Something like that was not reported during the latest inspection in 2019.

According to Abdelnaby, a bolted splice could be an effective repair method, i.e., steel plates used to connect the fractured plates of the beam. Nonetheless, due to load redistribution once the repairs are performed, additional cracks could potentially appear at other weak spots along the beam. Therefore, all weak components of the structural system should be identified by performing a robust structural engineering analysis to understand the overall behavior of the structure.

This incidence and the subsequent closure of a major transportation artery such as the I-40 Hernando de Soto Bridge, once again, point out how vulnerable the bridge infrastructure is in the United States of America. Nonetheless, several structural health monitoring techniques as well as novel monitoring technologies and computer simulations can help prevent such failures. Real in-service data of bridge behavior can be used to calibrate detailed computer models to develop effective repairs, enhance bridge performance and prolong its life.