Mark Girolami, professor at The Alan Turing Institute, stated that “3D printing is poised to become a major technology in engineering, and we need to develop appropriate approaches for testing and monitoring to release its full potential”.  The occasion for this declaration was the release of the World’s first 3D-printed steel bridge which was opened to the public in Amsterdam earlier this month. It was installed over one of the oldest canals in Amsterdam’s city centre – the Oudezijds Achterburgwal after four years in development. The bridge was unveiled by Her Majesty Queen Máxima of the Netherlands.

The 12-meter-long steel structure was developed by MX3D, a Dutch robotics company, in collaboration with a consortium of experts. The bridge represents a major milestone for 3D-printing technology. The team of The Alan Turing Institute has designed and installed a smart sensor network on the bridge which is attached to the structure itself in order to gather data, as a ‘living laboratory’, regarding its health in real-time showing how it changes over its lifespan.

The data that the sensor collects include information about the air quality, temperature, strain, displacement and vibration. The data will be used by the bridge’s ‘digital twin’, a computer model that will emulate the actual bridge in real-time, to improve accuracy over time. The computer model will help understand how a full-scale 3D-printed steel structure works in real-world. 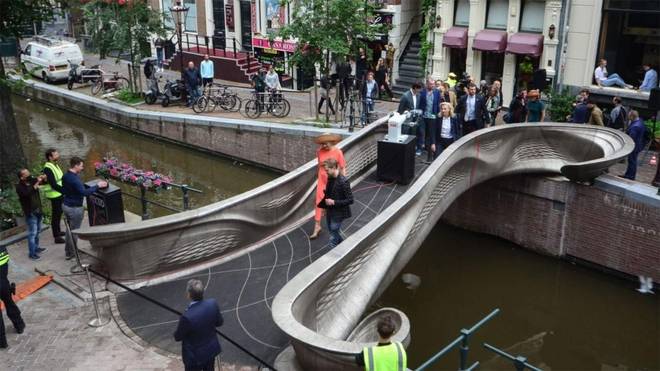 The world's first 3D-printed steel bridge has opened in Amsterdam