The RAM Frame analysis in RAM Structural System completes a three-dimensional finite element analysis of the lateral components for both gravity and lateral load cases. The results of this analysis are used to design the moment frames and shear walls in concrete building structures.

This article highlights three of these advanced analysis features:

When designing slender concrete walls, like tilt-up wall panels, engineers must consider both moments induced by the applied loading and secondary P-delta moments resulting from the axial loads acting on the deflected wall shape. ACI 318 outlines two design methods to account for these effects (see ACI 318-19 11.8.3.1):

Both ACI 318 design methods assume that the wall is simply supported and that the wall cross section is constant over the height of the panel (no openings). Although the ACI equations can be modified to fit other conditions (see ACI 551.2R-15 for details), it can be challenging to account for complex wall configurations without sacrificing accuracy.

The advanced analysis feature in RAM Frame is developed specifically for the analysis of tilt-up concrete walls. It can be applied to virtually any wall configuration and supports a wide variety of load conditions, including eccentric load transfer from supported beams and decks. It can also capture effects, like diaphragm deflection at the top of the panel, that cannot be easily accounted for with other methods.

The advanced analysis is an iterative, second order elastic analysis, which automatically updates the wall shell element stiffness based on the deflected shape of the wall. The effect of cracking on wall stiffness is accounted for with a user-defined cracked section factor. The analysis uses an iterative approach to converge to the final equilibrium, since the final deflected shape is unknown at the start of the analysis and changes as the second-order moment increases. Unlike the main RAM Frame analysis which analyzes load cases and calculates load combinations based on superposition, the advanced analysis analyzes each individual strength and service load combination defined in the model.

Tilt-up wall designers can increase their productivity using the advanced analysis. One key advantage is that the all wall panels and structural framing are analyzed and design in a single model. This helps engineers efficiently document designs and react to architectural changes.

Differential vertical displacement of columns and walls can induce significant forces and moments in the structural elements that they support. This effect increases as the axial stress in the supports increases and is an important design consideration for multi-story concrete structures.

Multi-story concrete structures are typically analyzed with a single model with full loading applied to all floors. This type of analysis, however, fails to account for changes in structural displacements and member force distribution as the building is constructed story-by-story. As construction progresses, the differential support deflection changes as self-weight is added as each floor is cast and as creep and shrinkage effects accumulate over time. The incremental loading and material effects affect the axial deformation of the supports and, in turn, the forces induced in the members that they support.

The construction stage analysis in RAM Frame is a special analysis that accounts for the load history and time-dependent creep and shrinkage effects. In the analysis, the structure is analyzed in stages with one or more stories added at each stage. Creep and shrinkage effects are calculated based on concrete material models and a duration that is defined for each stage. An age-adjusted effective modulus is also calculated to account for changes in concrete strength at early ages and reduced creep coefficients that occur when loads are gradually applied. This analysis helps engineers quickly calculate accurate design member forces for multi-story concrete structures.

Optimizing member sizes and properties to control lateral drift of buildings can be challenging when the load distribution of force to the lateral resisting elements is complex. For example, many engineers assume that the distribution of lateral in-plane shear force among lateral force resisting walls or frames is proportional to the cross-sectional properties (area, length, etc) of the elements. However, this assumption may be unconservative in some cases. A few examples include:

The RAM Frame drift control analysis is a powerful tool to study and control the lateral drift of buildings. The analysis, which is based on well-known Castigliano’s Energy Theorem, helps users quantify the contribution of each lateral beam, column, or wall to the drift of the structure.

In the analysis, the total drift at a point is considered as the sum of the following displacement behavior for each lateral member in the structure: axial, shear, flexure, torsion, and beam-column (panel zone) joints. The analysis output reports a separate participation factor for each of these separate behaviors for each lateral member in the model. Members with the highest participation factors contribute most to the building drift. Similarly, the highest participation factor reported for the various behaviors (axial, shear, flexure, etc) identifies the behavior that is most important to the drift. This information helps engineers identify the specific members and section properties (e.g. section area or moment of inertia) to change to achieve a design that is optimized for drift. 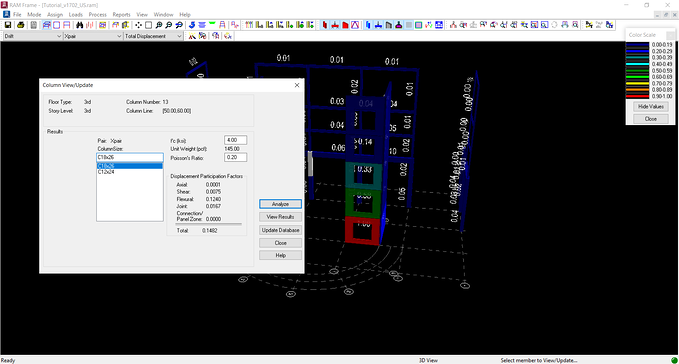 RAM Structural System is a highly sophisticated analysis package that includes many time-saving features, unavailable in many competing software packages. It is used by concrete designers around the world for structures ranging from one-story tilt panel warehouses to high-rise concrete towers.

Fellows Dube and Associates shared the following regarding their use of RAM Structural System for a 6-story concrete structure that was recently constructed in a high seismic region in South Africa:

“The building design was done using Bentley's Ram Structural System. It was possible to model the entire building model and compute the gravity and lateral loads. The use of RAM Structural System allowed for high productivity rates and design efficiency and hence reduced costs in providing the engineering solutions … There was accuracy in structural members transferred without error and collaboration with real time updates for the Architect and the structural engineer.” 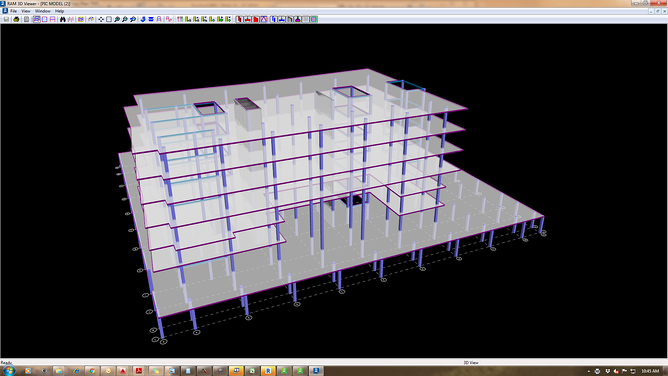