RAM Structural System offers a complete solution for the analysis, design, and documentation of concrete and steel building structures. It includes many time-saving features designed specifically for the analysis and design of buildings that are not available in many general-purpose finite element analysis applications.

Equilibrium load paths in concrete structures are often sensitive to member stiffness, which is closely associated with cracking, applied loading, reinforcement design, displacement of supporting members, and other factors. Given typical project schedule and budget constraints, many concrete designers perform a single analysis with assumed, code-specified stiffness factors (“cracked section factors”) to achieve a code-compliant design. As these cracked section factors are rough approximations, some designers choose to consider a range of stiffness values to confirm their design is not heavily dependent upon the accuracy of the stiffness assumptions.

This article focuses on the analysis capabilities of RAM Structural System and RAM Concept and how they can streamline your concrete design workflows. Specific topics covered in the article include:

RAM Structural System uses several different analysis types that are intended for specific engineering design tasks. The following sections break down each analysis type and discuss how they are utilized for reinforced concrete design.

The RAM Concrete analysis is based on ACI 318-19 6.3.1.2, which states that gravity load effects for column, beam, and slab design can be determined using a single floor analysis that includes the supports above and below the level that are fixed at the far ends. The analysis is completed level-by-level from the top to the bottom of the structure, with reactions for a given level automatically added as applied loads on the level below.

The analysis assumptions in RAM Concrete are useful for engineers who prefer to check or envelope column, wall, and foundation designs using tributary gravity loads, which are less sensitive to member stiffness. A transfer floor, which deflects due to load transfer from the members it supports, is one example of a structure type that is sensitive to overall 3D effects and force redistribution due to changes in member stiffness. Because RAM Concrete analyzes one floor at a time and assumes a rigid vertical support at the base of columns and walls below the floor, the analysis forces more closely match those from a tributary analysis than a full 3D finite element analysis.

Other RAM Concrete analysis options and features that concrete designers find helpful include:

The RAM Frame Analysis is a fully three-dimensional finite element analysis of the lateral force resisting system (e.g., moment frames, braced frames, and shear walls) for both gravity and lateral load cases. By default, the analysis excludes gravity beams, columns, and walls. However, there is an option to include gravity columns and walls that support two-way slabs for the gravity load cases. Floor diaphragms can be defined as rigid, semirigid, or flexible, with options to include or exclude the out-of-plane stiffness of two-way slab diaphragms for the lateral load cases. The analysis also includes a non-iterative P-Delta method that considers all applied gravity loads and self-weight of the structure. Unlike the floor-by-floor analysis in RAM Concrete, the RAM Frame analysis captures the overall 3D behavior and redistribution of gravity forces due to deflection of transfer beams and slabs.

Other analysis features in RAM Frame that are useful for concrete structures include:

RAM Steel performs a simple tributary analysis that considers all floor members as simply supported and statically determinate. In the analysis:

Exclusion of two-way decks and indeterminate beams are two important limitations with this analysis.

Although the RAM Steel analysis is used mainly for the design of steel beams and columns, it is also important for the analysis and design of concrete structures in RAM Structural because:

RAM Concept is a separate application that designs conventionally reinforced and post-tensioned concrete floors and mat foundations. It is linked directly to RAM Structural System through an integrated, bi-directional data exchange.

RAM Concept completes a single floor analysis that is similar to the RAM Concrete analysis. Its capabilities also include a rigorous, non-linear load history analysis for long-term deflection calculations and a comprehensive dynamic analysis for walking-induced vibration response.

Examples of time-saving features available through the RAM Structural System-RAM Concept link and the RAM Concept analysis include: 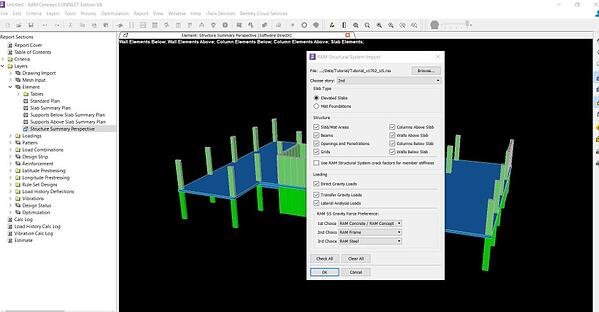 The Commentary to ACI 318-19 6.3.1.1 states the following regarding the relative stiffness assumed in analysis models to account for cracking and the inelastic behavior of concrete members:

As mentioned previously, a transfer slab supporting multi-level columns and/or walls is one example of a structure type that is often sensitive to member stiffness assumptions. Poor cracked stiffness assumptions in structural models of these floors may result in unintended force redistributions and unconservative designs.

Enveloping the force and moment demands from different analyses based on different cracked section factors is one method to ensure a safe, conservative design of such structures. The different analysis types available in RAM Structural System and the direct integration link between the products help engineers quickly design for such an envelope. The following outlines this type of workflow for a concrete structure:

Structural engineers depend on the RAM products for their concrete design capabilities and their ability to handle a variety of structure and material types.  DCI Engineers shared the following about their work on the Park 12 project, a 37-story concrete tower with adjacent 6-story concrete podium structures, recently completed in San Diego:

“Using Bentley’s innovative structural applications, DCI was able to produce an optimized design that minimized material use and maximized design efficiency. RAM Concept and RAM Structural System gave our team the ability to model the concrete and steel with ‛real world’ accuracy. This drastically increased the design’s efficiency and constructability …

"Bentley RAM is truly the best analysis and design software on the market for concrete and steel. The helpful user interface and on-hand customer service allows engineers to feel confident with their analysis and gives clear and understandable information. RAM has saved hundreds of hours of design time resulting into more efficient and better quality design that allows for easy back checking and transfer of information to our clients.” 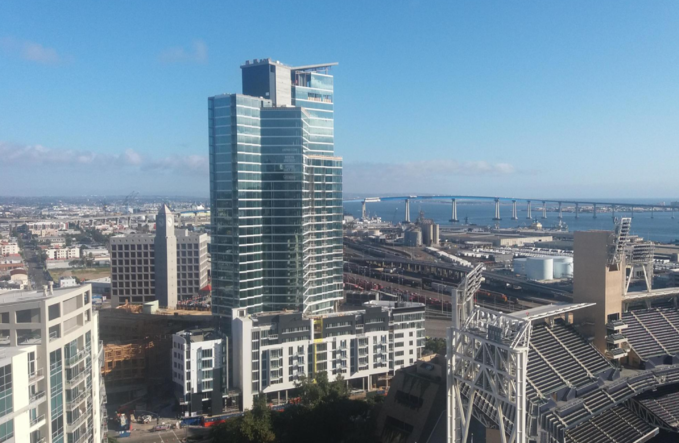