Did the Great Pyramid have an Elevetor?

In constructing the Great Pyramid at Giza it is suggested that an internal vertical shaft and a man-powered elevator could have been used to hoist the building stones from the level of the King’s chamber (at 45m) to the working plateau at higher elevations. This method would have been more energy efficient and faster than using ramps or levers. 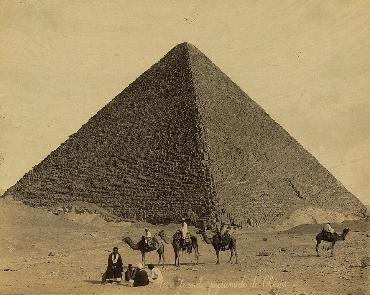 Figure 1- The Great Pyramid of Khufu at Giza.

Most agree that the Great Pyramid at Giza, the last remaining Wonder of the Ancient World, was an amazing job of construction. It’s a great pity, though, that the Egyptians left little or no records of how they did it. Lacking such information, a number of theories about the construction methods have been proposed over the centuries by archeologists, historians and engineers. Construction theories include straight ramps, spiral ramps, levers, kites and supernatural levitation. Another possible method, involving an internal elevator, is discussed below.

First of all, a few words about the scale of the job. Previous explorations and measurements have revealed that, with a base measuring 230m on a side and a height of 146m, the pyramid contains about 2,300,000 stones. These include mostly limestone blocks weighing an average of 2 tons each and a number of huge granite blocks, some weighing more than 50 tons. All of these had to be quarried, transported to the site and assembled into a pyramid containing three chambers and numerous passages, as shown in Figure 2. Many historians agree that the stones were loaded onto wooden sledges and hauled to the site by teams of men or oxen. How such heavy stones were then lifted to the great heights is still an open question. 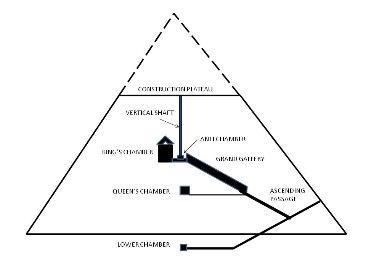 Figure 2- Cross section of the Great Pyramid at Giza, showing the chambers, passages and a possible vertical shaft used for hoisting stones to the construction plateau.

Many construction theories involve the use of one or more ramps, either straight ramps up to the height of the plateau under construction, or ramps spiraling up the sides of the pyramid to the plateau. Both types of ramps were practical during the construction of the lower tiers, but as the elevation of the construction plateau reached higher levels, the use of ramps reached a point of diminishing returns. There are two reasons why the exclusive use of ramps seems unlikely. First of all, the length of the ramps would need to be quite long if the grade of the slope is held to 10% or less, as some have suggested. For example, a ramp, either straight or spiral, with a 10% grade and reaching all the way to the apex would have a length of 1.4km! The math reveals that as the height of a ramp increases, a point is reached where the volume of the ramp exceeds the volume of the partial pyramid. Figure 3 shows how the volumes of the pyramid and ramp increase with height. In this example the ramp has a 10% grade, embankments of 52 degrees and a 10 m wide lane along the top. At a height of less than 100m the volume of the ramp exceeds that of the pyramid. Further, the rate of volume increase of the ramp (slope of the curve) exceeds that of the pyramid at about 50m height, meaning that beyond this point more material was going into the ramp than into the pyramid. In order to have enough stability for the job, the ramps themselves would have to have been made of stone, or faced with stone. All this extra stone would have to be quarried, hauled to the site and disposed of when the job was completed.

Figure 3 - Plots showing the relationship between the volumes of the pyramid and ramp, as the height of construction increases.

A second drawback with ramps is the amount of energy wasted to friction as the stone is dragged up an incline. The energy (E) required to haul a stone block up a ramp is given by the expression in Figure 4. The first term (Wh) is the energy required to lift the block up to the plateau against gravity, and the second term is the energy required to overcome sliding friction. Again, assuming a 10% ramp grade [tan (a) = 0.1] and a coefficient of friction = 0.3 (wood on stone, lubricated with water), the energy spent to overcome friction is three times that to overcome gravity. The relationship between hauling energy and ramp angle is shown in Figure 4, where it is seen that a steep ramp is more energy efficient. 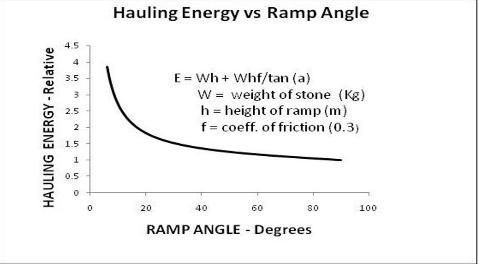 Figure 4 - Plot showing that the energy required to haul a stone up an incline decreases with the ramp angle. A steep ramp is more efficient.

One might argue that cost and efficiency were of no concern to the pharaoh, and regardless of the waste in material and labor, a simple brute force ramp all the way to the top was the way to go. Maybe cost was no object, but time was very much a concern, for it was imperative to finish the pyramid while the pharaoh was still alive. It was therefore important to the pharaoh’s engineers to minimize the total hauling energy (man-hours of labor) as much as possible. Although energy formulas were unknown in those days, the pharaoh’s engineers could easily have analyzed the problem by experimenting with a scale model. Therefore, there must have been a strong incentive to make the slope as steep as could be managed. Two theorists, James Edwards  and Franz Lohner,  are in agreement with this conclusion. They suggest that all but the largest stones were hauled straight up the side of the pyramid on wooden sledges by large teams of men. Both writers assume that the polished facing stones were installed as the pyramid was built, thus providing a smooth surface for the sledges. They propose that the sledge runners would have been lubricated with water to reduce friction. This would have required workers on ladders accompanying the sledge to pour water continually under the sledge runners.  Another method for hoisting the stones, a system of levers and timber cribs, was proposed by Prevos . His method does not address the problem of lifting the 50 ton granite blocks to the levels of the royal chambers.

Man-powered Elevator - This article suggests still another method of construction, which would have been much less labor intensive than hauling blocks up an inclined plane, and would have been especially suitable at the higher elevations. It involves the use of an internal vertical shaft near the axis of the pyramid, extending from the level of the king’s chamber to the construction plateau; together with a man-powered apparatus for hoisting the stones up the shaft.

In the next stage, a small ramp was constructed up to the entrance passage on the north face of the pyramid. The building stones were then hauled on sledges up the ascending passage and through the grand gallery to the antechamber, adjacent to the king’s chamber. The sledges were then lifted up a vertical shaft, which extended from the roof of the antechamber to the construction plateau. A four-sided wooden scaffold, straddling the shaft at the plateau, was equipped with four sets of rollers, as shown in Figure 5.The rollers and axles were likely made of ironwood, a strong, dense wood with self-lubricating properties. Ropes were led over the rollers on each side of the scaffold and attached to a metal lifting hook. At the bottom of the shaft the hook was connected with a rope bridle to a sledge waiting in the antechamber. 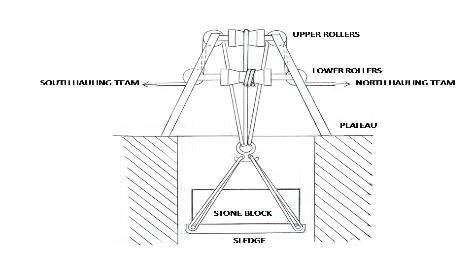 Figure 5- East view of the four-sided scaffold used to lift the stone blocks to the construction plateau. The top rollers are positioned to lift the load clear of the plateau. The bottom rollers position the hauling ropes for a level pull.

On the plateau, four teams of workers (Figure 6) then pulled in unison and hoisted the sledge up the vertical shaft. It is estimated that a total of 40 men, divided into four hauling teams, would be able to lift a 2 ton load to the plateau at a velocity of 30m per minute. With a simple ratchet device on each of the lower rollers, the teams could haul in stages, releasing most of the tension on the hauling ropes as they repositioned themselves for the next pull. This feature would have been especially useful when the area of the plateau diminished at the higher elevations. When the sledge cleared the surface of the plateau, two or more wooden beams spanning the shaft were then placed under the sledge, so that it could be skidded away from the shaft and onto the work area. The hook was then let down the shaft to fetch the next sledge. As each tier of stones was added, the scaffold was levered up to the new plateau. 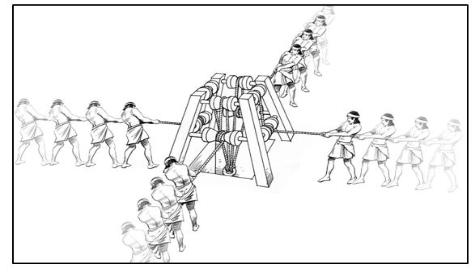 Figure 6- Four teams of workers are shown hauling a building stone up the vertical shaft to the construction plateau.

Another important function of the scaffold would be for transporting workers and supplies to and from the plateau. At the end of a work shift, the men on the plateau would hoist up their relief workers and supplies in large wicker baskets, after which the relieved workers would be let down the shaft in the same baskets. This apparatus, then, was essentially a man-powered elevator.

In its present condition, the apex of the great pyramid is missing. All of the polished facing stones on the sides of the pyramid, as well as those from the top, were pilfered by later rulers for their own monuments. The remaining plateau at the top of the pyramid measures about 12m on a side. At this point, or a bit higher, the construction method described here would have ended. The vertical shaft would have been plugged at both ends and perhaps filled with stones and rubble. Before the shaft was filled, the roof of the antechamber would have been reinforced with a portcullis of granite blocks, which can be seen there today. Also in evidence is an arrangement of stones at the summit that suggest a plug at the top of a vertical shaft, as suggested in the article by Gerardo.

In constructing the Great Pyramid, the practicality of ramps for moving the building stones diminished as the elevation of the structure increased, owing to the great quantity of materials and labor required for the growing ramps. Once the massive granite blocks for the king’s chamber were in place, the balance of the pyramid could have been constructed by hoisting the building stones up a vertical shaft extending from the anteroom to the construction plateau, with great savings in time, material and labor.

Introduction to Diaphragms As diaphragm is consid...

When a structure is subjected to sufficiently high...

When a nonlinear relation holds between applied fo...

The moment distribution method is a structural ana...

Fatigue is the initiation and propagation of crac...

Elasticity is ability of a deformed material body...