The local fire department swiftly responded. Fortunately, the first responders found that no one was injured by the incident. “When we arrived on scene, we found the top level of the structure had fallen into the first level. There were no cars underneath, and no one was hurt”, the Battalion Chief Shane Poynter stated.

According to Lexington Herald Leader, a snow plow truck was on top of the structure when it collapsed. The parking garage is owned by a joint venture between the Webb Companies and the Greer Companies. Dudley Webb of the Webb Companies said the collapse occurred where a structural beam gave way. “There was snow buildup and ice in that one section which caused that one beam to collapse,” Webb said.

The owners of the building pointed out that the structure was not being used due to safety reasons. Structural problems with the parking garage were known to the owners who had been mobilized to address them. “Building ownership has engaged architects, engineers, and consultants to evaluate the structure and make recommendations on stabilizing the site and will immediately begin repairs to stabilize the structure,” Webb Companies stated in a press release. Immediate repair works focus on the avoidance of any further collapse or damage to the surrounding buildings. 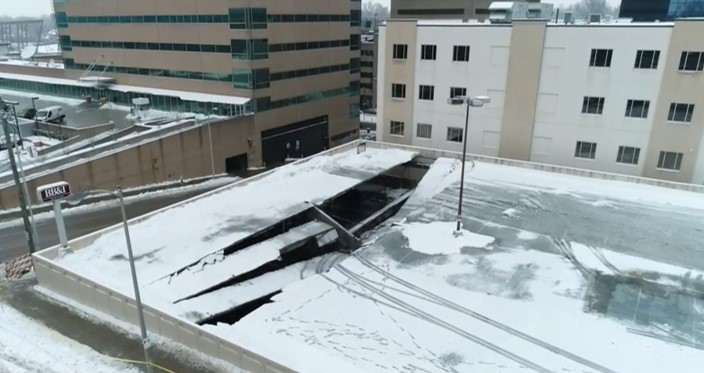