A 12-storey residential building north of Miami has collapsed, trapping people under a pile of rubble. Rescuers are desperately searching for survivors in the debris.

Here's what we know about what happened.
It happened really quickly
A large section of Champlain Towers, on the seafront in the town of Surfside, crumbled to the ground in the early hours of Thursday, May 24th. It took just a few seconds. People described hearing what sounded like thunder before seeing a huge cloud of dust.
Nearly half the building crumbled
The building contained 136 apartments and 55 of them collapsed, leaving piles of debris. Images taken before and after the collapse show the extent of the damage. The shattered and compressed layers of the building's collapsed floors can be seen on the ground. The collapse happened while many were still sleeping. Residents' furniture and belongings could be seen in what remained of their homes.
Many are trapped in the rubble
At least four people have been killed but dozens more are missing. As families desperately wait for news, search teams have been working around the clock using sonar cameras and specially trained dogs to scour the rubble for survivors. Dozens have been pulled free. Teams have also been tunneling through an underground car parking lot below the building in an effort to reach victims. Nonetheless, officials say the efforts are dangerous as further rubble could collapse on top of them.
The building 'was sinking'
What caused the 40-year-old building to collapse remains unclear. But it was undergoing a standard "recertification" process and required repairs, officials said. Experts who studied the area where the building stood said the land it was built on was sinking during the 1990s. The study from a researcher at Florida International University found that the area around the building, constructed on reclaimed wetlands, had been sinking at a rate of two millimeters per year for the last three decades. However, the report's author, Prof Shimon Wdowinski, cautioned that the study was just a snapshot in time and said land subsidence alone was not likely to cause a building's collapse.
The building consultant's report
An inspection in 2018 highlighted "a major error" in the original design of the apartment block that collapsed. The engineer's report, which has just been made public, said the fault prevented water draining from the base of the seafront Champlain Towers. The building consultant's report from three years ago came to light in a series of documents made public by the town of Surfside.
The engineer, Frank Morabito, said the lack of proper drainage was "a systemic issue" that stemmed from a flaw "in the development of the original contract documents". He flagged what he called "major structural damage" to the concrete platform beneath the swimming pool deck. "The failed waterproofing is causing major structural damage to the concrete structural slab below these areas," he wrote. "Failure to replace the waterproofing in the near future will cause the extent of the concrete deterioration to expand exponentially." The engineer also referred to "abundant cracking… of columns, beams and walls" in the parking garage. His report didn't suggest the 40-year-old building was at any imminent risk of collapse but he urged that the concrete repairs be carried out in "a timely fashion". Correspondents say it is not yet clear if the repairs were carried out or if the problems highlighted contributed to the structural failure. Champlain Towers had been due to undergo a multi-million dollar refurbishment this year. The governor of Florida, Ron DeSantis, has promised that authorities will find out what happened saying "anybody affected by this directly wants that answer". 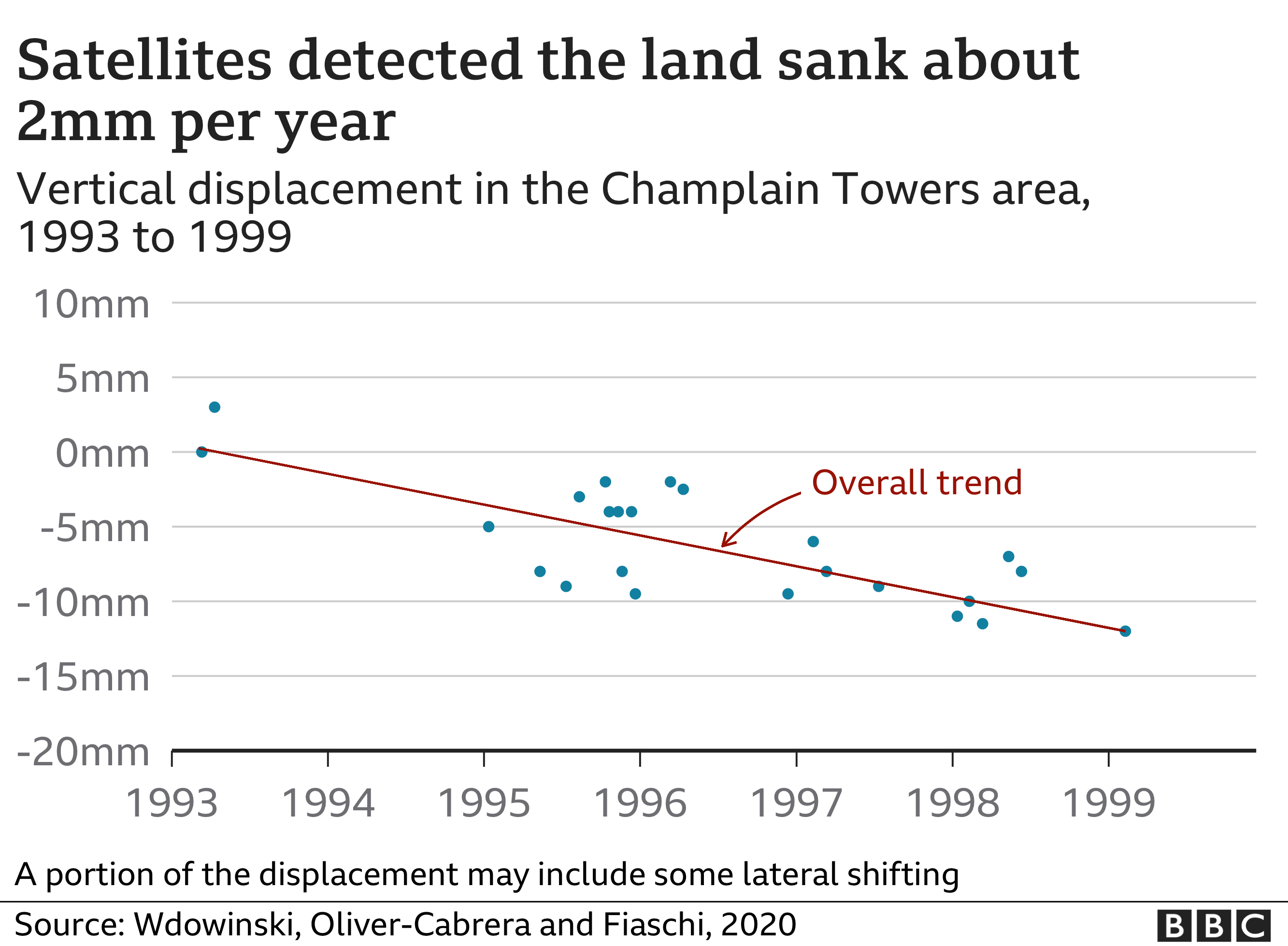