A five-story building collapsed in the Georgian Black Sea resort city of Batumi on Friday, and several people are believed to be trapped in the rubble.

At least five people, including two children, were killed when the residential building partially collapsed, the country's interior ministry said on Saturday.

A large section of a residential building in the Georgian city of Batumi collapsed on Friday, Georgia's First Channel TV station and Russia's RT channel reported.

"So far emergency responders have saved two citizens, who were brought to hospital, and recovered five bodies," police said in a statement.

However, one of the injured died after being transferred to the hospital, they said later.

Rescue teams were initially using their bare hands to remove the huge mounds of rubble before professional equipment arrived at the scene of the collapse.

The accident has been blamed on unsafe renovation work, authorities said.

Three people have been arrested in an investigation into the collapse; the owner of a ground-floor apartment, and two construction workers he had hired.

The two workers were acting under the direction of the owner and "in gross violation of safety rules," which ultimately led to the collapse of one of the entrances of the apartment building, according to a police statement.

All three face between two and ten years in prison if convicted.

The residential building was constructed in 1981, and over the years, two additional floors were subsequently added, along with a lift. 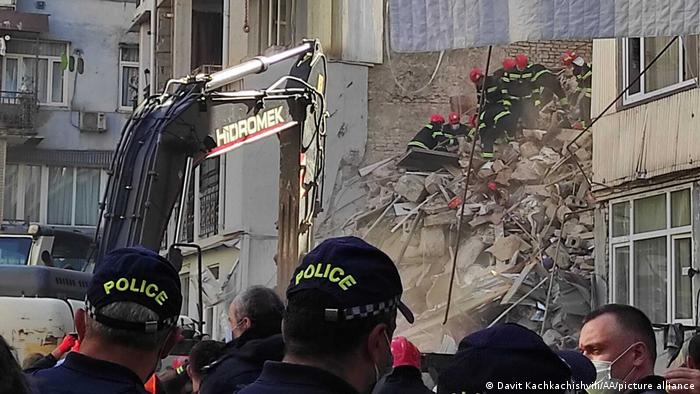 Rescuers Search For Survivors After Building Collapses In Batumi, Georgia