An under-construction building in Surjani Town, Pakistan, collapsed. One person died and ten others sustained injuries, two of them in critical condition.

According to details, a ground plus four-storey building in Sector 4/D of Surjani Town collapsed on Monday night at around 12:42 with reports that several labourers buried under the debris. After rescue efforts, 11 were rescued and shifted to Jinnah Hospital. One of the injured, identified as 27-year-old Zariam Dewayo, died during treatment while two others are in critical condition.

According to preliminary investigation, the construction of the collapsed building started six months ago. Area people said that substandard materials were used in the construction. Thickness of roofs was kept at three inches instead of standard thickness of five inches. Apart from this, the foundation also lacked concrete and steel.

The building was already under litigation with a case pending at Sindh High Court, Karachi Registry. Sindh Building Control Authority and other relevant authorities have been made parties in the petition number D-3811/2022 filed by Shahri Muhammad Sabir.

According to area residents, the builder had arranged accommodation for labourers and contractors inside the building. The occupants were sitting on the ground floor of the building and were busy chatting with each other when a few blocks fell off. Several people sensed the danger and escaped. In a few moments, the entire building collapsed, leaving no chance for others inside.

Several rickshaws and a car parked inside the building were also buried under the debris while nearby buildings were also damaged. Residents of the area including MQM Pakistan workers as well as rescue teams from Chippa and Edhi reached the scene. Police and Rangers also reached after receiving the report.

The residents and police waited for the Sindh administration to send machinery to remove the debris, but to no avail. Subsequently, area officials of MQM Pakistan arranged heavy machinery on rent and started the work of lifting the debris. DIG West Nasir Aftab said that heavy machinery was available for the operation but it was not being used due to probable danger to survivours under the rubbles. Meanwhile, Surjani Town police have registered case against builder Shoaib, contractors Abdul Majeed and Sadiq, supervisors Asad and Nauman, besides Saima and Shahid on the complaint of the state through ASI Abdul Khaliq.

The Pakistan Tehreek-e-Insaaf (PTI) Karachi President Bilal Ghaffar has expressed grief over the collapse of the building. He said, action should be taken against SBCA officers who allowed the construction of buildings. He said that the corrupt officers sitting in the SBCA are robbing general public. He urged NAB and anti-corruption to take immediate notice against SBCA officers. 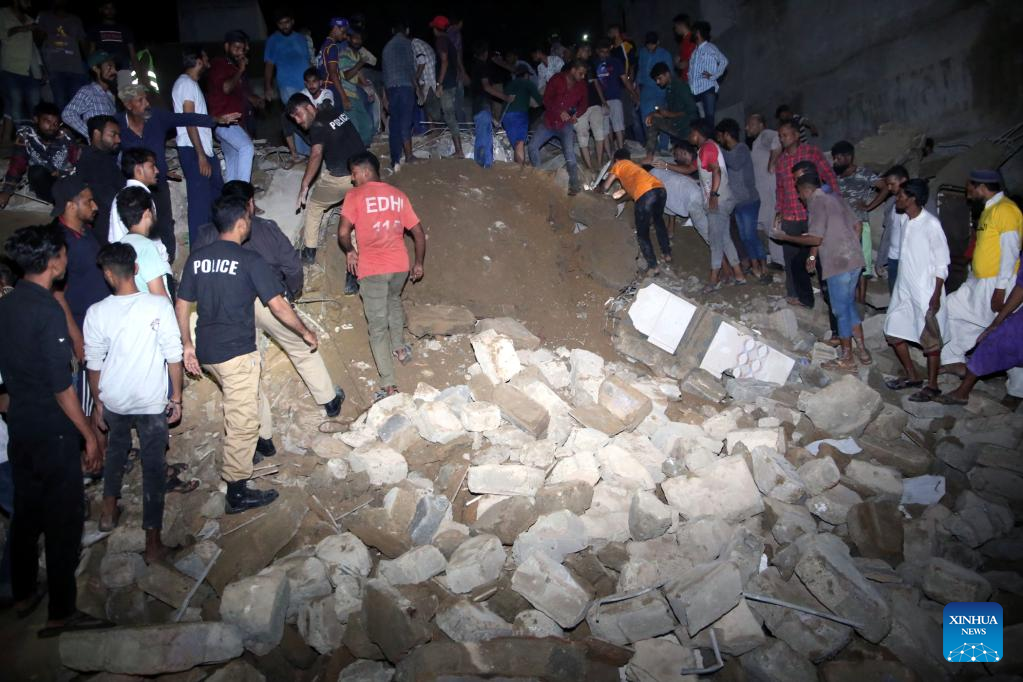