Slide events are common in Osito Canyon in the Angeles National Forest. During heavy rains in 2005 , an approximately 900 ft long landslide occurred along the historic Old Ridge Route overlooking the canyon.

Several sensitive utilities, including high-pressure gas pipelines and fiber optics, were damaged during the event. Utility repairs were made, and monitoring wells and instrumentation were installed to detect additional movement. Over the years since the initial event, further movement has been detected by inclinometers and a slide plane identified. A retaining structure was needed to protect the pipeline and prevent a potential release of crude oil during a slide event. In addition, the National Forest Service planned to restore the Old Ridge Route and the retaining structure would also protect the restored roadway from sliding. 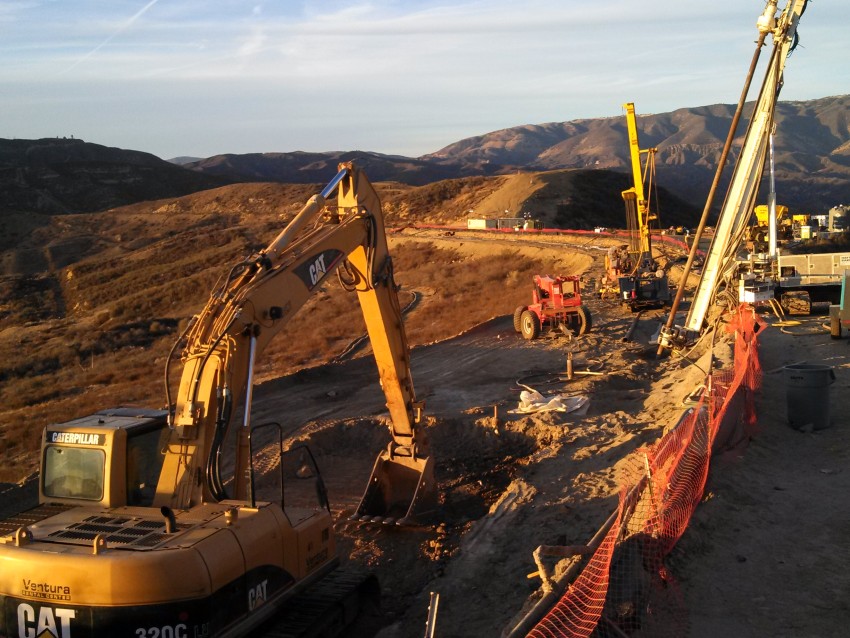 The project is in the Angeles National Forest jurisdiction, restricting the type of retaining structure installed. Requirements included that the structure should have little impact on the area as possible and not be visible from any direction.

Several retaining structure options were initially recommended by the owner’s engineer, including a tangent pile wall, a reticulated micropile wall (RMW), a soldier pile wall, and a soil nail wall. Keller was awarded the project after demonstrating its history of successful slide repair for previous national forest system slides where its Micropile Slide Stabilization system (MS3) was used. This approach was accepted by the owner and the National Forest Service. An MS3 wall would also require less truck traffic through the environmentally sensitive area and installation could be accomplished with smaller equipment. The 945-ft-long MS3 system consisted of tightly spaced battered micropiles installed through sleeved holes in a heavily reinforced 3-ft by 4-ft concrete grade beam. Evenly spaced 75-ft-long, 7-strand tieback anchors were installed through the grade beam for additional lateral restraint. Over 28,000 LF of reticulated micropiles and 7,500 tieback anchors were required to complete the retaining structure which was completed within schedule and on budget.

Looking for more information? Fill in the form and we will contact Keller for you.