Damaged West Seattle Bridge leads to emergency evacuation of an entire region around it. The region called “fall zone” constitutes of a non-residential area, within which parts from the bridge might fall, in case of a collapse.

In late March, engineers from Seattle Department of Transportation examined the critical cracks observed on the central span of West Seattle Bridge and decided that, in an attempt to stabilize the bridge, the cessation of road traffic was necessary. Since then, the rate and propagation of cracking has decreased since the traffic load, of more than 100,000 vehicles, has been removed.

West Seattle Bridge’s three highest central spans over Duwamish River are supported from four piers. Seattle Department of Transportation explained thoroughly that the main problem of the bridge’s current condition is the bearings on one of the support piers (Pier 18). These bearings are unable to function as designed, i.e. help the bridge move under thermal and/or seismic-related deformations. The bearings are not functional because they are totally compressed. This condition affects the entirety of the bridge by adding  pressure to nearby sections of the pier, something that is probably the reason behind the observed critical cracking. 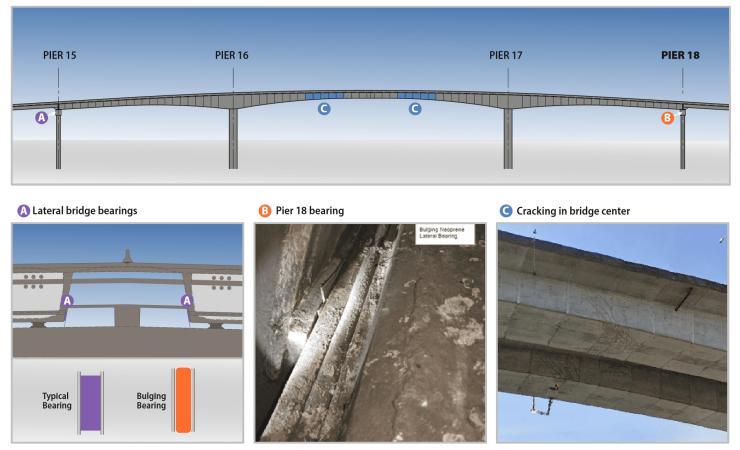 The current condition of the bridge (Credits: bridgeweb)

Sara Davis from SDOT stated: “We’re hoping that releasing the bearings helps stabilize the bridge. If it does, then repairing the bridge may be feasible. If it turns out that releasing the bearings does not slow the cracking of the bridge, it means that the factors contributing to the cracking are much more complicated than just those due to the bearing, and that the bridge structure could be irredeemably compromised”. Engineers from Seattle Department of Transportation are currently investigating the most effective way to release the compressed bearings. At this point, the most feasible scenario seems to be the local destruction of the concrete around the bearings, the subsequent replacement of the bearings and, finally, the filling of the gaps with new concrete. Around mid-May, engineers will be able to monitor any changes in the bridge in real time and evaluate the severity of the problem using appropriate equipment, which is currently being installed.

Monitoring of cracking at the central span of the bridge (Credits: WestsideSeattle)

Until today, it is unknown whether a complete repair of the bridge is possible. If it is deemed feasible, it is estimated that the retrofit could add 10 years to the service life of the bridge. The repair of the pier is expected to begin in late 2021.

Building collapses are common in Egypt, where sho...

An earthquake of magnitude 7.6 struck Indonesia (...