A torrential rainfall hit Central China on the 20th of July causing the death of several people. Although floods during summer season are not unprecedented in some parts of China, the current record of rainfalls has alarmed officials and scientists, and has raised questions about the way in which the country would deal with more extreme and unpredictable weather.

At least 25 people have lost their lives as their bodies were recovered from the city’s subway system. Furthermore, seven people are still missing according to the latest news.

More than 100,000 people have been evacuated from Zhengzhou, a city of 12.6 million on the banks of the Yellow River, with thousands of emergency personnel deployed to assist in the effort, state media reported.

There were conflicting reports about the status of the Guojiazui dam near Zhengzhou, with CGTN initially announcing that it had collapsed at 1:30 a.m. on Wednesday, before later appearing to walk back its reporting. A statement from the Ministry of Emergency Management also said the dam had broken, according to a screenshot cited by the state-run China Daily. However, that line has since been removed.

At nearby city of Gongyi four people have been found dead, as flood waters swept through residential areas, forcing more than 20,000 people to leave their homes.

In the city of Luoyang west of Zhengzhou, Chinese military personnel raced to blast a dam and divert the floods on Tuesday night at the request of county authorities. Heavy rains had caused a 20-meter (65 foot) breach in the dam, which authorities said "may collapse at any time," according to a statement from the Central Theater Command of the People's Liberation Army.

Footage broadcast by Xinhua and shared widely online showed passengers in Zhengzhou trapped inside a flooded subway car, packed tightly together as the water rises. Outside the window, dark floodwater rips past, surging down the subway tracks.

The city's subway system, which contains seven lines and 153 stations, suspended all operations after the incident, said provincial authorities.

According to state broadcaster CGTN, more than 6,000 firefighters, and nearly 2,000 members of the police and Chinese military, had been deployed across disaster hit areas. Footage from the ground showed soldiers and emergency teams rescuing residents on rafts and clearing toppled power lines.

The report also said if global greenhouse emissions peak around 2040, some parts of China like Shanghai would experience a more than 25% increase in extreme rainfall while other areas, like northwestern Guangzhou-Shenzhen, would see more drought.

Though the rains have since eased, problems are likely to persist, as dozens of dams and reservoirs have breached warning levels.

Xinhua reported on Wednesday afternoon that "a large section of the downstream slope of the dam has crumbled, but the dam itself has not collapsed." 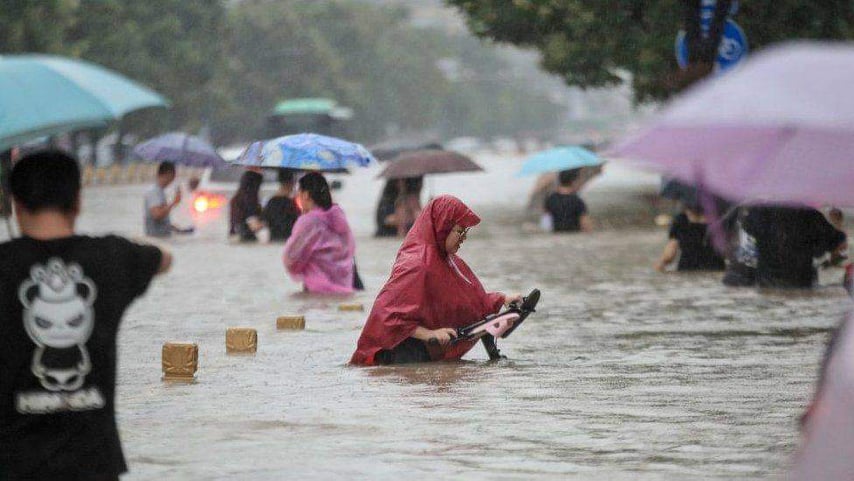