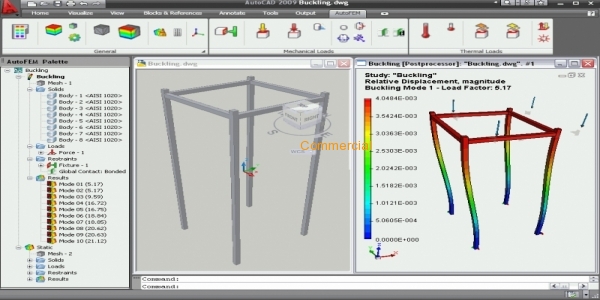 This type of analysis is important for designers in the construction industry and planners of other very large mechanical structures, such as fuel tanks, bridges, towers, ships, etc. Sometimes, the structure, which was tested by the static analysis and proven to be reliable, may be destroyed due to primarily axial load due to of the loss of stability. This module is designed to calculate such critical loads.

Using the AutoFEM Buckling Analysis module, mechanical engineers and construction experts who work in the AutoCAD medium are able to carry out calculations of the mechanical stability of the structure. The essence of the stability computation is as follows. Sometimes, mechanical structures which satisfy conditions of strength in the face of static loads may spasmodically collapse when significant forces are applied to this system. This physical phenomenon is usually called “the loss of stability”. Stability calculation is crucial, for instance, for high structures in which forces are directed along them. The Euler’s classical stability calculation implies the determination of the “Factor of Critical Load". This factor is computed for some "trial” and preset mechanical load and allows one to estimate the value of the maximum permissible load on the mechanical system, which, when exceeded, leads to the stability loss. This load is defined as the product of the trial load value and the calculated factor of critical load. Along with the critical load factor, as the result of the stability calculation, the user will obtain the expected form of stability loss, which shows possible deformations of the structure in the case of the loss of stability. If the calculated critical load factor is negative, this means that for the preset load conditions, there will be no stability loss.In the parameters of the problem of stability one can determine the number of forms of equilibrium states to be determined and other parameters of calculation.As a result of the buckling analysis, values of the coefficients of the critical loads at which there is loss of stability are obtained, as well as appropriate forms of instability.