The accurate, long-term deflection calculation of concrete floors is a difficult task. It requires rigorous consideration of cracking, tension stiffening, and associated long-term effects such as creep and shrinkage. While most concrete designers understand how externally applied floor loads and creep can contribute to cracking, they often incorrectly calculate or even ignore restraint to in-plane shrinkage and/or thermal strains as a source of cracking. This can have severe consequences, including costly serviceability issues that are only noticed long after building construction is completed.

This article focuses on restraint cracking and long-term deflection calculation. The article will attempt to:

Although the concepts discussed in the article apply to both shrinkage and thermal effects, restraint effects will be referred to as “shrinkage” restraint for the remainder of the article.

Shrinkage restraint is difficult to capture analytically because a complex, non-linear solution is required. To simplify the calculations, many engineers rely on approximate methods to account for shrinkage restraint cracking. The most common method is to use a reduced concrete modulus of rupture or cracking moment in the analysis so that cracking is detected at a lower stress threshold. Two frequently used effective modulus of ruptures used with the ACI design code are 4*sqrt(f’c), which is referenced in ACI 435R-95 “Control of Deflection in Concrete Structures,” and 5*sqrt(f’c), which corresponds to 2/3 of the cracking stress and aligns with the tension stiffening equation in ACI 318-19 24.2.3.5.

While the reduced modulus of rupture method is easy to apply in practice, it has some disadvantages:

RAM Concept rigorously accounts for the internal shrinkage restraint effect at each design cross section using detailed strain/curvature calculations, which consider all reinforcement intersecting the section and time-dependent shrinkage strains for each step in the load history. The approach is similar to the calculation outlined in Eurocode 2-2004 Clause 7.4.3(6) Equation 7.21.

RAM Concept also summarizes important calculated parameters in tables and plots to help engineers quickly verify unexpected results and isolate the effects of the different behaviors (creep, shrinkage, cracking, etc.). Using this information, engineers can determine the relative importance of internal shrinkage restraint or external shrinkage restraint to the load history deflections. They can also identify areas where cracking is expected using contour plots that map the ratio of axial stress to cracking stress across the floor. 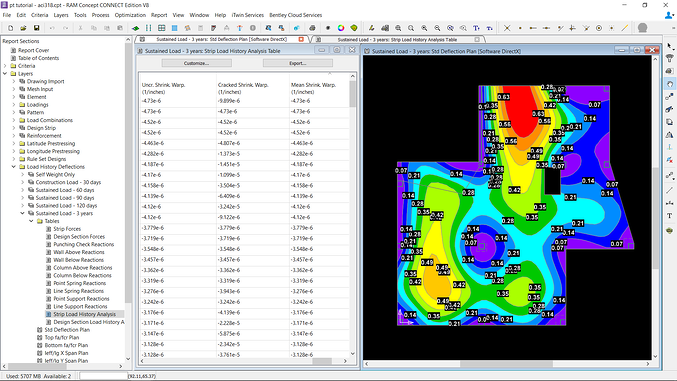 Baldridge & Associates Structural Engineers (BASE) shared the following after their successful design of the Ritz Carlton Residences in Hawaii, which won the Post-Tensioning Institute’s 2017 Project of the Year:

“By using RAM Concept software, we were able to confirm that we could maintain serviceability and performance characteristics with relatively thin 7" post-tensioned slabs, providing a solution that would maximize the number of floors at 38 within the project’s stringent 350-foot height restriction … The project required many different types of glazing systems throughout the tower, which required a substantial amount of coordination between our office, the architect, and the glazing designer. Being able to quickly produce slab deflection plots at the various stages of construction and life of the structure, and review these with the architect, contractor, and the glazing designer, was key to the success of the slab and glazing design.” 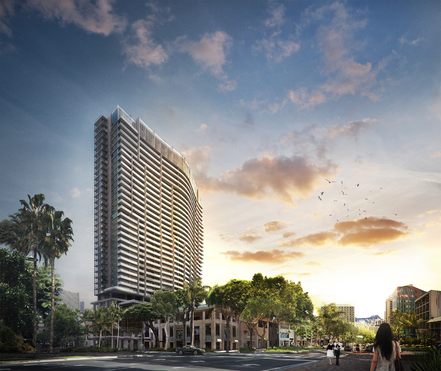 In order the hydrogen to be distributed, appropri...

The use of non-renewable source of energy in gene...