Bridges are structures that enable crossings over physical barriers including rivers, valleys and canyons. They were developed early in human history along with the introduction of first civilization patterns in Mesopotamia, a region in southwestern Asia, located between the Tigris and Euphrates rivers.

Of course, ancient bridges were much simpler facilities compared to the ones developed today. They were constructed using raw materials such as wood, stone and soil. Their bearing capacity was limited and they suffered damage from rainfalls as soil material was "washed away".

It was in the Roman times that the technology applied in bridge engineering was upgraded. Romans introduced mortar produced by volcanic rocks and the fabled Roman concrete that enabled larger spans and increased bridges' bearing capacity.

The bridge, also known as the Zhangjiajie Grand Canyon Glass Bridge, is located in the Shiniuzhai National Geological Park, southeastern China. It is both the longest and highest glass bridge worldwide stretching 430 meters and spanning two mountains.

The facility that opened 4 years ago, provides a magnificent yet a terrifying view to visitors that stand at a height of 300 meters above the ground and look through the glass. 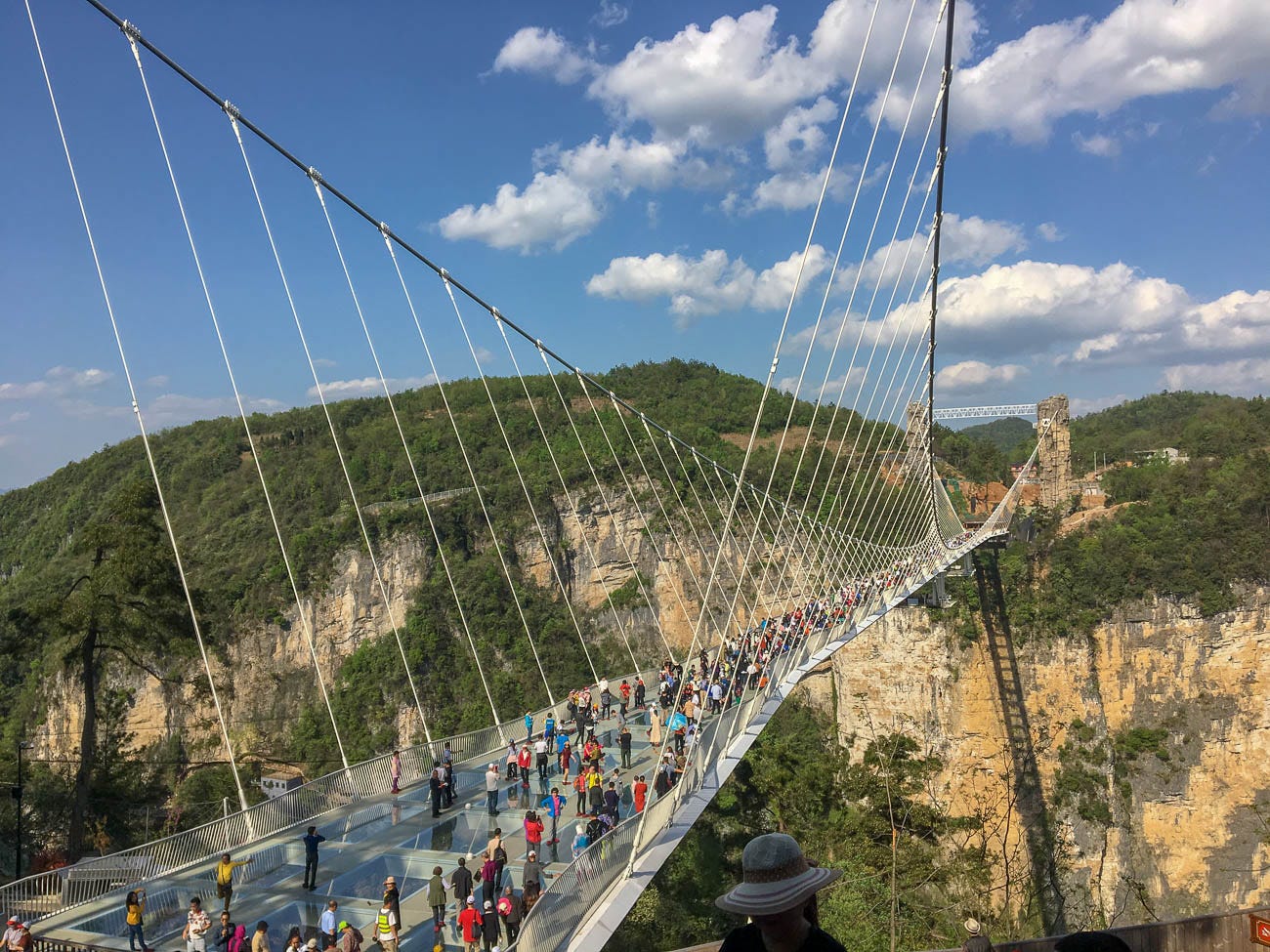 The Eshima Ohashi Bridge is a 1.7-kilometer structure that spans two cities over a lake in Japan. It is the longest rigid-frame bridge in Japan and the 3rd in the world. What is extraordinary about the bridge is its extreme inclination when observed from one of its ends. The facility became famous for its inclination, however, its steepness is partially an optical illusion as the actual slope of the structure is 5.1% and 6.1% at each side, respectively. 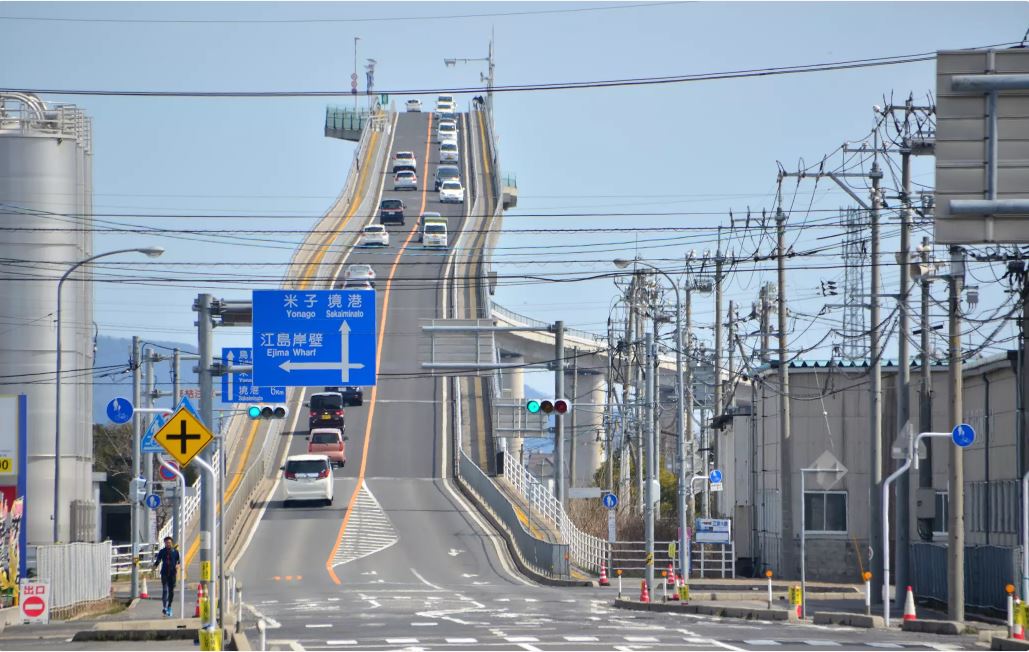 The Titlis Cliff Walk is located in Mount Titlis of the Swiss Alps. It is a 1-meter wide suspension bridge that stretches for 100 meters and is used by pedestrians. It is probably the highest suspension bridge in Europe standing at an elevation of 3,020 meters. The facility was completed in 2012 and the construction lasted for almost half a year due to harsh conditions. If the weather is good, visitors can observe a staggering 500-meter drop of the glacier below along with the impressive surrounding landscape of the Alps. 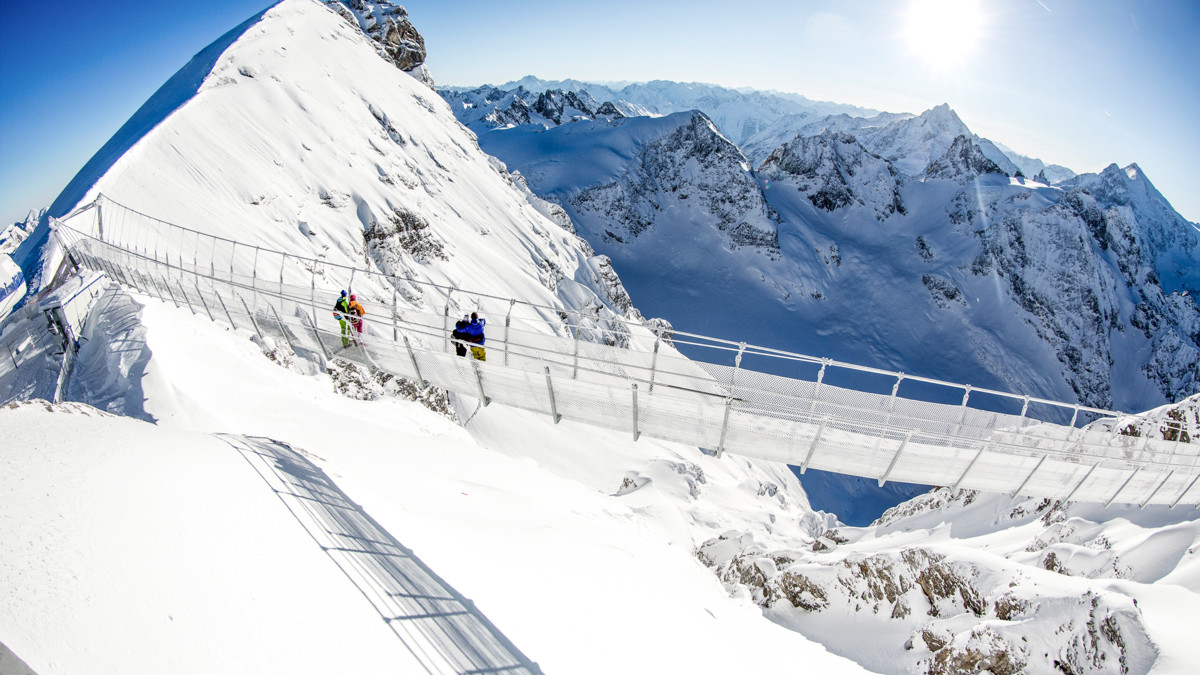 The Royal Gorge Bridge was constructed in 1929 and spans over a vast valley that has been created due to the flow of the Arkansas River. It is one of the highest suspension bridges in the world and provides a magnificent view of the valley from a height of about 290 meters above the river. Visitors may cross the bridge on foot or, under certain circumstances, they can use their vehicle. 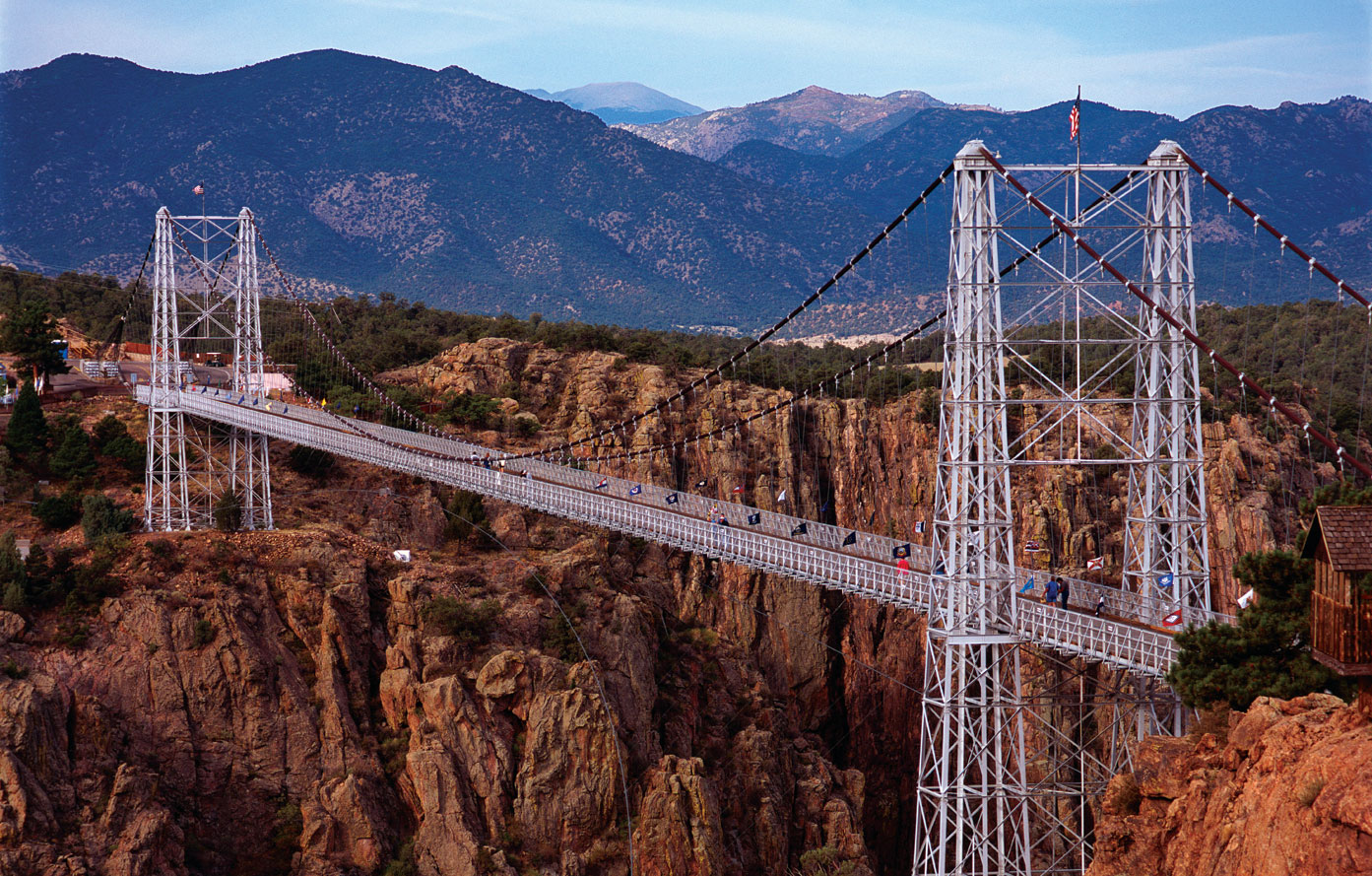 The facility is located above the Machinchang mountain in Malaysia. It was constructed in 2005 and is one of the longest curved suspension bridges worldwide. The structure that reaches a 100-meter elevation, hangs from a single pillar and can accommodate up to 250 visitors at any time. People can admire the beautiful nature that includes a jungle landscape. According to experts, its curved shape makes its acculturation with the surrounding environment harmonic. 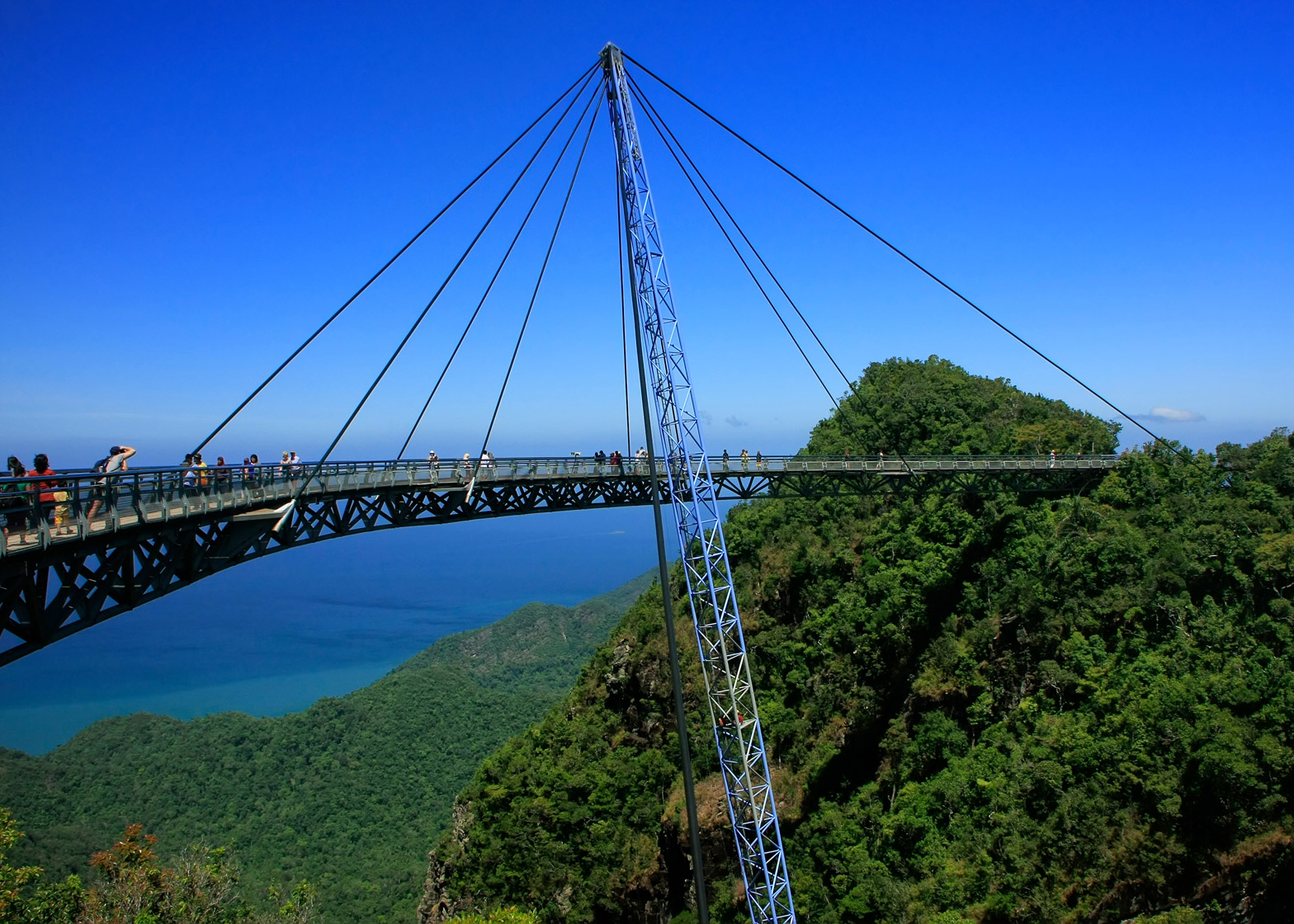 The Kusma Gyadi which is the highest (117 meters) and the longest (344 meters) bridge in Nepal, spans over the Modi River. The facility opened 10 years ago and provides a frightening passage above the rivers for pedestrians. Visitors have mentioned being amazed by the size of the bridge and also scared to walk on it as the view is breathtaking. 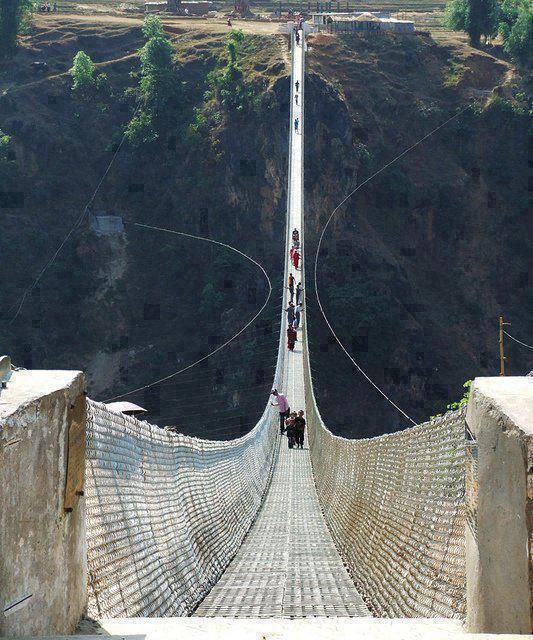 The place where the Kawarau Gorge Suspension Bridge is located, is also known for the birth of bungy jumping back in 1998. The bridge was constructed in the late 19th century, 43 meters over the Kawarau River in the South Island of New Zealand. Harry Higginson, the designer of the structure, utilized pioneering applications (e.g. inner inclined cables) to tackle the applied forces caused by strong winds. He received Telford Premium, an engineering award, in 1882. 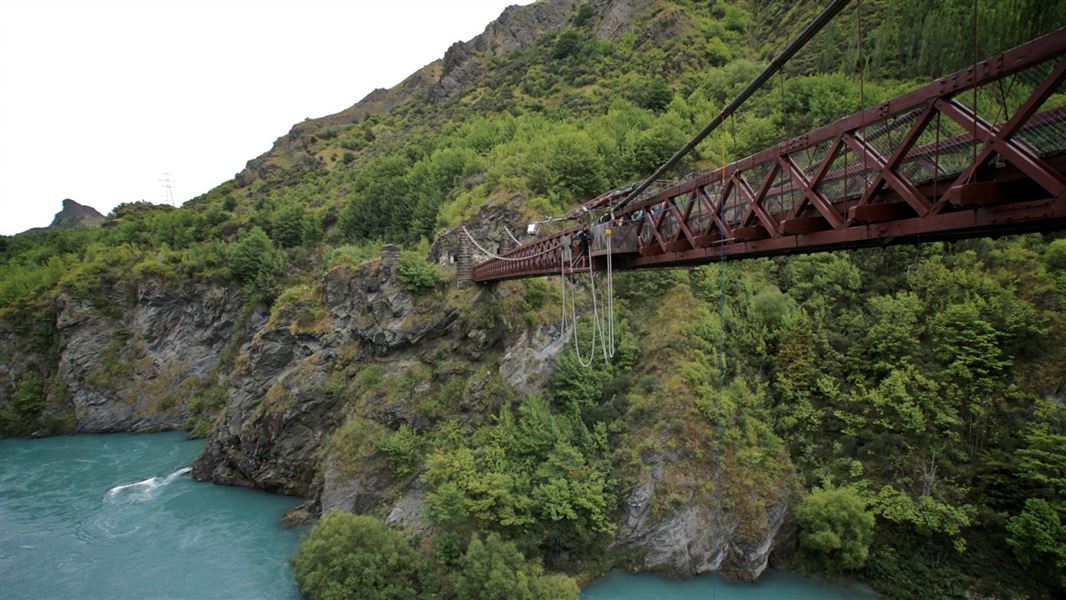 Golden Bridge is a stunning structure located in Vietnam that combines both unique design and impressive scenery. The bridge crosses over a cliff to connect the cable car station with the gardens of a resort. It is supported by two giant hands giving the impression of uplifting above the ground. Visitors state that it provides a form of "divinity" in the environment. 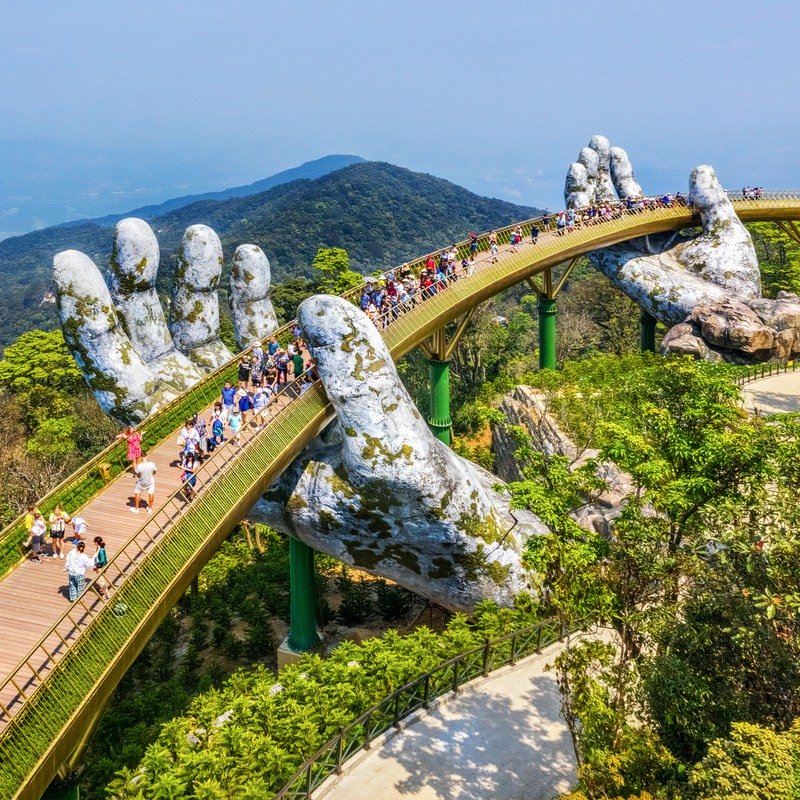 The Canopy walkway is practically a network of 7 bridges located in the tropical landscape of Kakum National Park in Ghana. The bridges are elevated 40 meters above the ground and are hanging by trees. The structures are totally harmonious with the jungle environment and do not influence the landscape. At first sight, it looks like they are constructed by wood and rope but, they are actually made of wire and wooden planks to increase safety. 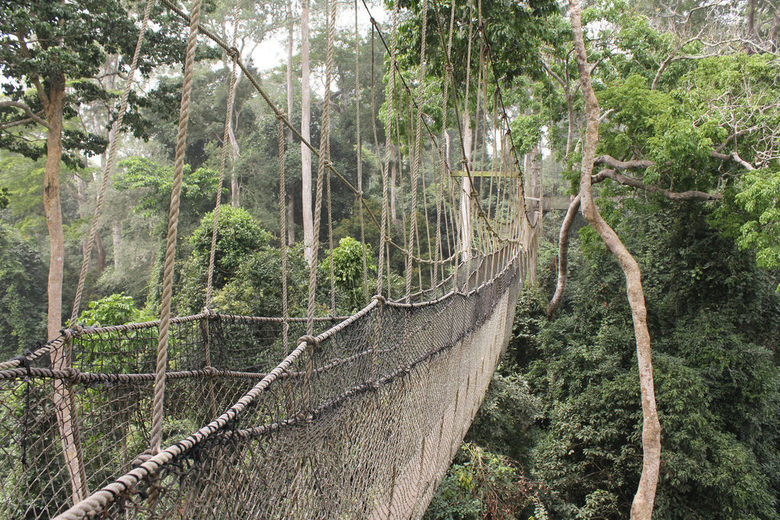 The facility is a suspension bridge located in the Swiss Alps. Measuring around 170 meters in length, it stretches over the Trift Glacier providing an amazing view to its visitors. People are carried to a nearby site with the utilization of a cable car. The Trift Glacier is currently melting as a result of temperature rise. 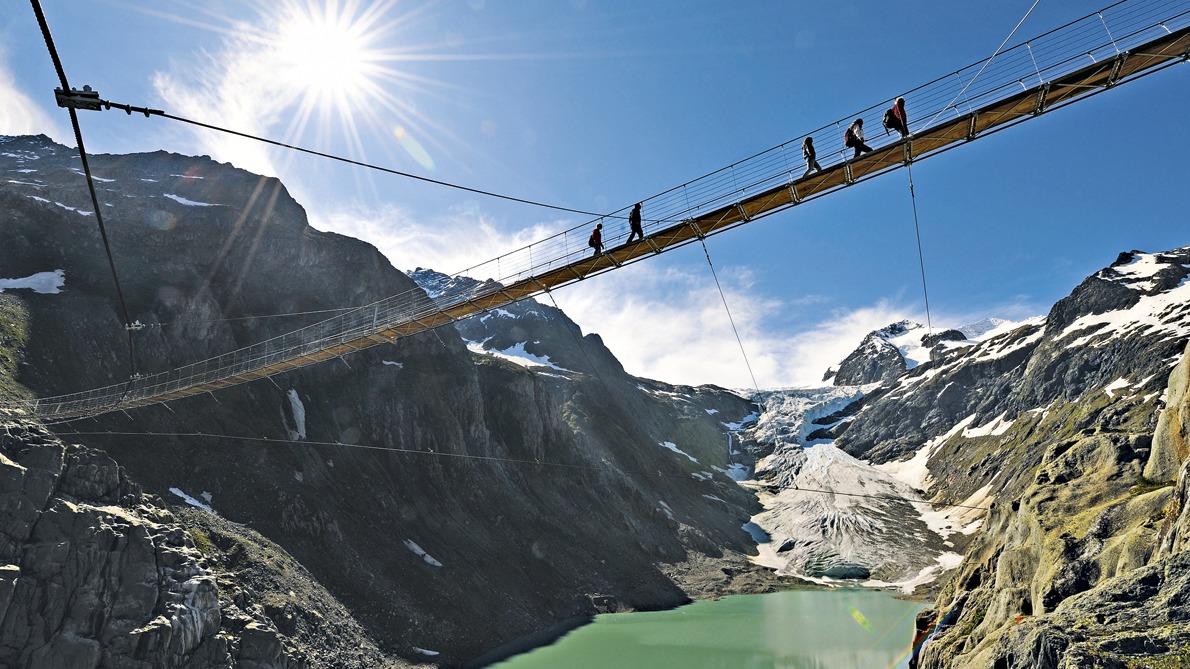