The fallen brick wall also caused the damage of an elevator shaft at the development site, bringing the construction project's assignments to a halt, due to concerns that the elevator shaft might also collapse. 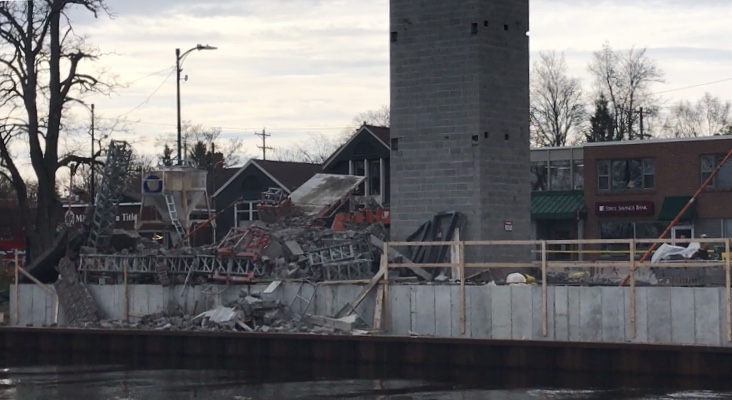 An elevator shaft damaged due to the wall collapse (Credits: 9and10news)

Emergency crews completely evacuated the site and closed down a part of Front Street to all traffic, soon after their arrival. Fire Chief Jim Tuller says: “There were three structures that were up, the structure on the east side was the one they were working on, and that’s what collapsed”. Chief Tuller says four workers were in the area of the wall’s collapse. “There were two victims that were hurt pretty severely. One was trapped by the debris field from a collapse of a portion of the building on the east side of the structure which was the part of the building they were working on.”

The project in downtown Traverse City consists of the construction of a four-story building, including offices of Honor Bank, retail space and other upper floor offices.

Until now, the exact cause of the collapse is yet unknown but a thorough investigation from a team of architects and a structural engineer is under way. The investigation, that will be continued for several weeks, intents to verify if the construction had gone ahead as initially planned. Moreover, research will be conducted about the wind speed and direction at the time of the incident, even though there are indications that there was no wind at that time.