Last week, heavy rainfall across central and western Europe caused rivers to burst their banks, leading to at least 180 deaths and hundreds of people missing. As floodwaters start to recede in the coming days, the death toll may continue to rise.

Additionally, the Associated Press reported that thousands of residents are now homeless, after the flooding hit Belgium and Germany.

According to the Guardian, two regions of Germany, North Rhine-Westphalia and Rhineland-Palatinate, were among the areas that were affected the most by the torrential rainfall. As a result, most of the deaths have occurred in these areas.

Rescue crews across the region were frantically working to rescue stranded residents from homes submerged in floodwaters as the building threatens to collapse, the AP reported. "We have never seen such a catastrophe, it is truly devastating," Rhineland-Palatinate premier Malu Dreyer told state lawmakers, according to AFP.

On Saturday 17th of July Mayor Marcel Maurer announced that the water levels at Wassenberg, a town near Cologne were beginning to stabilize, following the breach of a dam on Friday which caused the evacuation of 700 residents. Another dam (Steinbachtal dam) on Saturday was still risk, and 4,500 people were evacuated by the authorities. Experts are planning to reassess the structural integrity of the dam.

Federal Minister of Defense Annegret Kramp-Karrenbauer stressed that disaster relief is now the top priority of the military. Approximately 900 soldiers have been deployed in these efforts. The military units used inflatable boats and helicopters to reach people stranded on rooftops, but downed phone and internet connections hindered the rescue efforts, according to the AP. Tanks were also used to clear mud, trees and debris from roadways.

Flooding was not limited to western Germany this week with reports of flooding along eastern Germany's border with the Czech Republic.

The severe flooding posed problems in neighboring countries as well.

In Belgium the death toll rose to 27 on Saturday 17th, while 103 people are still missing, according to officials.

Mayor Philippe Godin stated to the press that after the Vesdre River in Belgium burst its banks on Tuesday and Wednesday, the force of the water caused several buildings to collapse. While Mayer Godin been interviewed, camera crews captured water rushing through a building, more of the wall collapsing and residents climbing onto the roof before jumping onto the neighboring building to escape the crumbling structure.

On Thursday, Christine Defraigne, the acting mayor of Liège, Belgium, urged residents living along the Meuse River to evacuate as the rising river threatened to pour over its banks, RTBF reported.

Furthermore, major highways in Belgium were also submerged in floodwater and railway service was stopped. A train was derailed in the Belgian Ardennes after a portion of the track was washed away by floodwaters.

Considering a tweet on Friday, the European Space Agency announced that it was using its Copernicus and Sentinel 1 satellites to gather more data over the weekend on the flooding. They have already collected enough data to provide some mapping of the flood extent to teams on the ground. 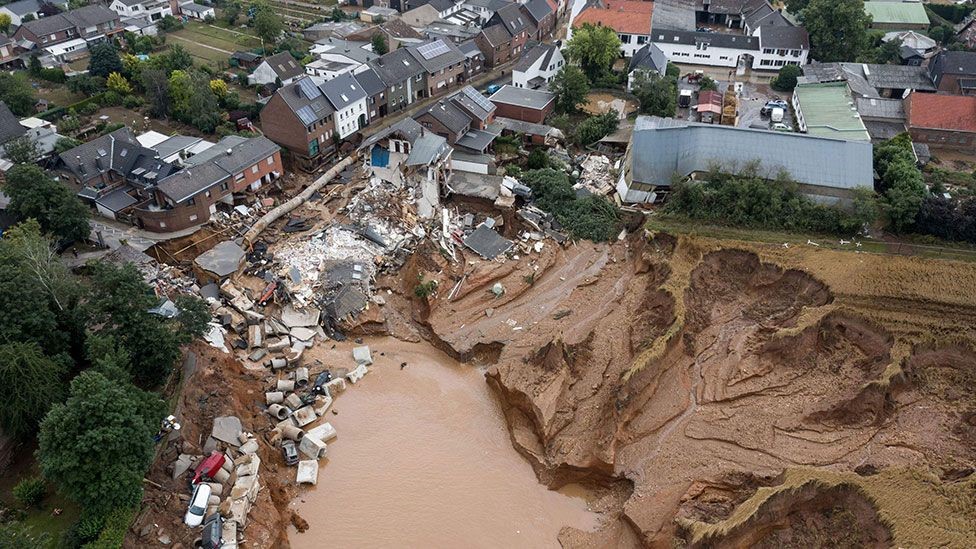