Two historic footbridges, the Diamond Jubilee Bridge and the Cuthbertson Memorial Bridge, located near Annan in the United Kingdom, have been washed away as the water levels at the River Annan hit a 50-year high.

The two historic bridges have allowed people to cross the River Annan for decades. The Diamond Jubilee Bridge was the older of the pair - built in 1897 to mark the 60th anniversary of Queen Victoria's accession to the throne. The 19th century suspension bridge was a B-listed structure. The Cuthbertson Memorial Bridge dated back to 1957 to commemorate Lt William Cuthbertson but was dedicated to everyone from Annan who lost their lives in World War Two.

Network Rail Scotland said the viaduct had been shut after the two bridges north of the railway had been washed away. Network Rail Scotland tweeted: "We're unable to allow trains to pass over the Annan Viaduct pending a daylight safety inspection. The line between Dumfries and Carlisle will remain closed until further notice." The rail line between Dumfries and Carlisle has been shut for safety checks on a viaduct in the town. Divers will be needed to go and check the structure but they will be unable to do so until the flow of water in the area slows.

As heavy rains continued to hit southern Scotland, four people also had to be rescued from premises on the Whitesands in Dumfries. A major incident was declared in Hawick on Thursday as water levels rose but police said it had now been stood down. Emergency services were called out early on Thursday evening to the Whitesands as the River Nith poured out across nearby car parks and roads. Police and the Scottish Fire and Rescue Service helped four people out of premises - they were all said to be safe and well.

Annandale South councillor Richard Brodie said the town was "still in shock" at the loss of the Diamond Jubilee Bridge and the Cuthbertson Memorial Bridge. "They are so much a part of our DNA in the town, that it is essential that they are replaced as soon as possible," he said. 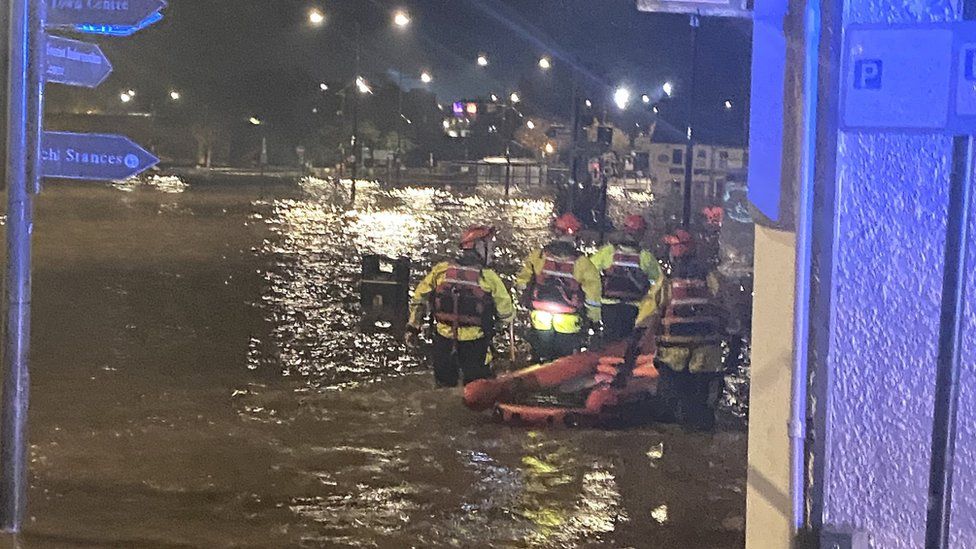