Record-breaking suspension bridge between Europe and Asia is now open

A massive suspension bridge across Turkey's Dardanelles Strait opened on Friday by President Tayyip Erdogan. The bridge is the latest in a series of major infrastructure projects which he has prioritized during his two decades in power.

Connecting Turkey's European and Asian shores, the 1915 Canakkale Bridge was built by Turkish and South Korean firms with an investment of €2.5 billion ($2.8 billion). It has the longest main span, the distance between the two towers, of any suspension bridge in the world.

Such mega projects have been central to Erdogan's achievements since his AK Party first came to power in 2002, including a new Istanbul airport, rail and road tunnels beneath Istanbul's Bosphorus strait, and a bridge over it.

Last year he launched what he previously called his "crazy project": a $15 billion canal in Istanbul intended to relieve pressure on the busy Bosphorus Strait. However, critics have questioned the project's viability given Turkey's economic woes, environmental risks and public opposition.

Ahead of national elections scheduled for 2023, opinion polls have shown a slide in the popularity of Erdogan and his AK Party, boosting the opposition's prospects of ousting him.

The main opposition CHP has criticised the potential cost of the bridge to the public purse, with media reports saying the build-operate-transfer agreement includes an annual payment guarantee of €380 million ($420 million) to the operators or a total €6 billion over the duration of the accord.

Erdogan said the price for passenger vehicles to use the bridge would be 200 lira ($13.50).

Work on the Dardanelles bridge project was launched in March 2017, with more than 5,000 workers involved in the construction.

It is the fourth bridge linking the European and Asian shores in Turkey, alongside the three built in Istanbul.

Until now, vehicles travelling between Anatolia and the Gallipoli peninsula had to cross the Dardanelles in a one-hour ferry journey, which including waiting time amounted to as much as five hours. The journey will now take around six minutes. 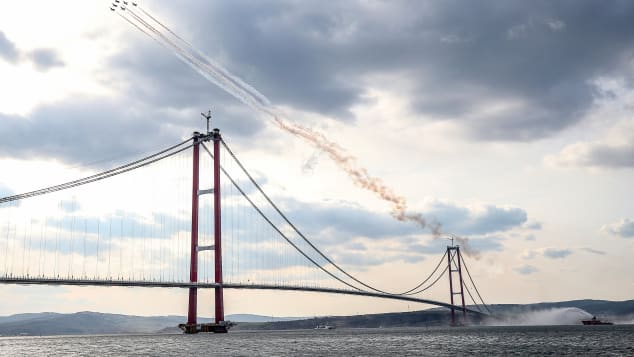