Indian Railways completed construction of the supporting arch for the world’s highest railway bridge. The bridge will be a critical link along India’s national infrastructure network as it located along the 326km Udhampur – Srinagar – Baramulla Rail Line. The final section of the load bearing arch was lowered in place on April 5, 17 years after the initial phases of the project.

The 17-span Chenab Bridge will be positioned 359m above the river, and thus it will consist of the highest railway bridge in the world. Th structure will span 1,315m and its cost is estimated at approximately $US 200mil. The remaining construction of the bridge is ongoing, with the stay cables to be removed and arch ribs to be filled with concrete before the viaduct is built and track laying can begin. Indian Railways estimate that the completion date will be December 2022. 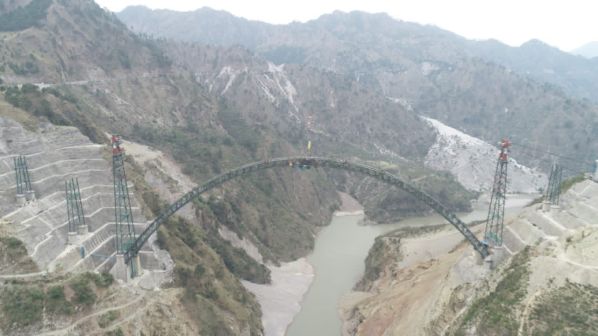 Closure of I-40 bridge in Memphis after cracks appear

The Tennessee Department of Transportation (TDO...

A 73-storey skyscraper evacuated after intense shaking in China

A 73-storey skyscraper was evacuated on May 1...

A 516-meters-long structure in Arouca Geopark...