Although the Unity Place project was designed in 2018 and structured in 2020, joint efforts from everyone in the design and construction along with the aid of Bentley Systems technology allowed WSP to create a low carbon office build, which is already 10 years ahead of London Energy Transformation Initiative (LETI).

Located in Milton Keynes, 50 miles North of London, Unity Place will be the new UK headquarters for Santander banking and will be the workstation for around 5,000 of its employees. Construction is due to be completed in March 2023.

Unity Place is between the existing Santander headquarters and Milton Keynes Central Train Station. As the first building people will see upon exiting the station, it was really important for the architect (LOM Architecture and Design) and Santander to create a building which would be a hub for the community. Thus, the ground floor will be open to the public and will have a range of amenities such as restaurants, bars, yoga room, and an auditorium. The roof will also have public access where there will be a range of roof terraces and running track so people can stay there and enjoy the vistas of Milton Keynes.

The structure itself has a typical RC frame. A contig wall runs around the perimeter of the two-story basement, acting as a retaining structure, and waterproofing measure.

Furthermore, a ground bearing raft foundation exists, which varies in depth. It is 1 meter deep in the center where it supports the eight superstructure levels, but then tapers down to 0.8 meters deep around the perimeter, where it's only supporting the two basement levels. These basement levels are made from RC slab. And they act as the car parking area and the plant storage.

The eight superstructure levels are PT slab, which vary in depth between 2.75 or 3.25 and these would be the office zones for those 5,000 employees. 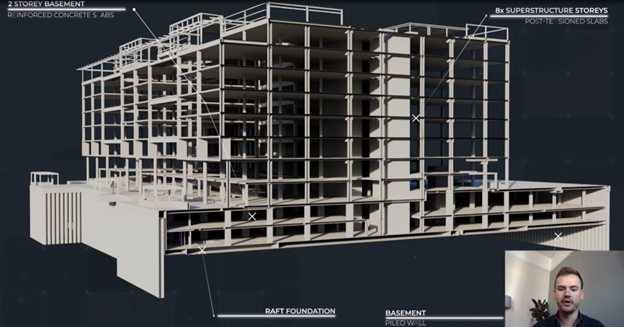 Construction site began in February 2020, and it took seven months (September 2020) to excavate the 180,000 meters cubed of soil from the two-story basement and reveal the contig wall.

Once this was completed, the frame progressed fast and completed in February 2022, exactly two years after construction started. Currently, work is in progress to finish the facades and the internal space layout. 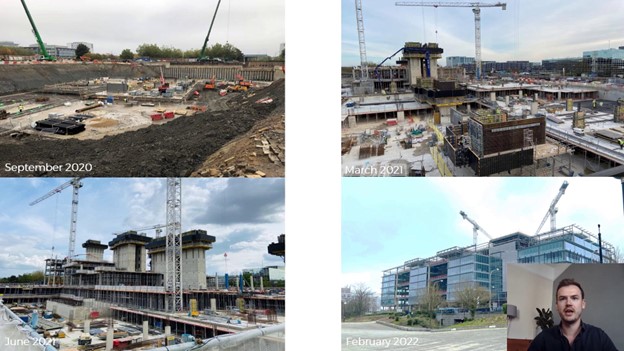 Due to the pandemic restrictions, WSP had to rely heavily on digital aids. These included virtual meetings, completing site inspections over video calls, and optimizing web-based collaboration technologies.

LETI stated that the total embodied carbon for all newbuilds by 2020 was to be less than 600 kilograms of carbon emitted per meter squared. This figure was then revised and reduced to 350 kilograms of carbon emitted per meter squared for the 2030 target. This was to allow the industry to adapt to a more sustainable way of working so that the target would be net zero by 2050 was more achievable.

The embodied carbon for the structure of a non-domestic newbuild accounts for 65% of the total, whereas the remaining 35% is made up from the facade, the MEP, and the finishes. For Unity Place, these values transpire to 350 kilograms of carbon emitted per meter squared for the 2020 target and 228 for the 2030 target.

Unity Place construction managed to achieve 219 kilograms of carbon emitted per meter squared, despite being designed in 2018, and being structured in 2020. 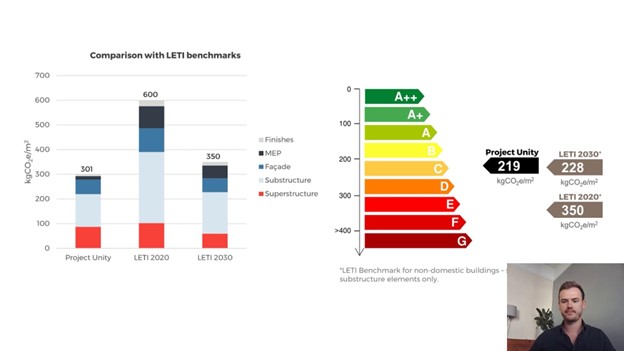 Nearly half of these 219 kilograms of carbon were attributed to the raft foundation, the B1 RC slab and the ground floor RC slab. Furthermore, nearly 25% of the 219 kilograms were attributed to the PT slabs of the superstructure elements. Clearly carbon emissions were dominated by the raft foundation, the RC slabs and the PT slabs. To design these as efficiently as possible, WSP used the aid of Bentley Systems technology.

Due to the vast size of the site, four tower cranes were required to be in operation during the building's construction. To eliminate the need of a piled crane base, an area of rough concrete was poured to act as a mass pad foundation in the temporary condition. WSP used RAM Concept to iteratively increase the area of rough foundation that would be required until the stress exerted on the soil was below its 200kPa bearing capacity under the crane's working loads. These pad foundations were then connected to the rest of the raft and became part of the B2 slab in the permanent condition. By doing this work, WSP saved 32 pallet foundations, as well as construction time on site.

Unity Place has a two-story basement with the raft foundation bearing onto a clay stratum. When clay is unloaded, which happened during the excavation process, it swells, causing an upward force referred to as heave. WSP calculated, through PLAXIS analysis, that the heave force was equivalent to 68 kPa, but it would be fully dissipated after 12 millimeters, as this is the maximum distance that this clay can swell.

To reduce the depth of the raft foundation, WSP created a RAM heave model. This included the 60 kPa upward force. They then iteratively applied downward force until the deflection of the slab was equal to 12 millimeters. At this point, they knew that the heave would have dissipated, and this would be the true value to design towards. By doing this, they were able to reduce the depth of the raft by allowing it to deflect and the force to dissipate instead of creating a rigid slab that would have to resist a 60 kPa heave force alone. This allowed WSP to have a much thinner, more economical, and efficient design.

In Unity Place, levels one to eight have a combined unplanned area of nearly 53,000 meters squared. RC frame was agreed to be used and WSP decided to create a RAM model using the post-tension capabilities within it to design a typical flow rate to optimize the slab depth compared to traditional reinforced concrete or PT slab.

They were able to reduce the slab depth by 25 millimeters. This may not seem like much, but this saving over 53,000 meters squared had a huge effect on concrete tonnage, and the carbon content of the slabs.

The 275 slab compared to the 300 PT slab saved 3,000 tons of concrete overall. And in terms of carbon, this was 300 tons. This may not seem like a lot, but it's little savings like this and investment in time to do the analysis, which contributed to surpassing the 2030 LETI target. 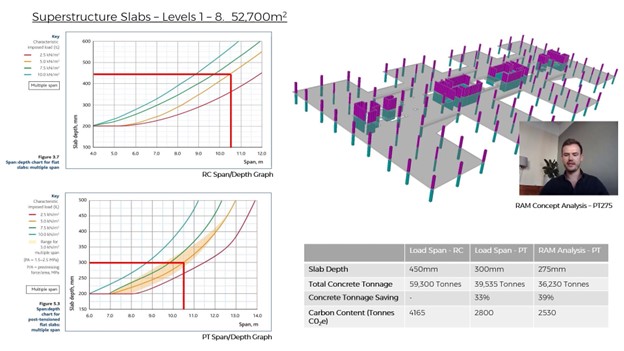 “The analytical capabilities of Bentley products were a key factor in refining our structural design and in showing that elements such as the raft and superstructure slabs were as efficient as possible. I hope Unity Place will be used as an exemplar project in the future on how low carbon office builds can be achieved,” Billy Kelham, Senior Structural Engineer from WSP said.