Hammersmith Bridge has been closed to motorists for more than two years after cracks appeared in its cast iron pedestals. It was closed entirely for 11 months amid fears that it could collapse, however it was reopened this summer to pedestrians and cyclists.

In August, Hammersmith & Fulham Council approved a £6M plan to stabilise the 134-year-old bridge for pedestrians, drawn up by engineering consulting firm Mott MacDonald. When started, the work is expected to take 46 weeks.

A rival design for the restoration of Hammersmith Bridge has been tabled in a bid to “break the stalemate” between the local council and government. The proposal has been submitted to the DfT’s Hammersmith Bridge Taskforce by Baynes and Mitchell Architects, with engineering input provided by Michael Hadi Associates. The London-based practice, which was shortlisted for the Stirling Prize in 2017, claims that its plans would remove the need for expensive strengthening works to the Victorian structure, as reported by NCE-sister title Architects’ Journal.

However, two options remain under consideration for further strengthening and restoration work, which would allow the council to reopen the bridge to motor vehicles. Funding is also yet to be agreed upon. The council is developing a memorandum of understanding with the Department for Transport and Transport for London (TfL) on sharing the costs. Engineers employed by the council and TfL have advised that a “shovel-ready” plan to fully restore the bridge for use by motor vehicles would cost up to £141M and take three years.

But Foster + Partners, working with bridge engineer COWI, has proposed a solution involving a temporary double-decker crossing, which would cost £100M and allow the bridge to reopen to all traffic within a year.

Now Baynes and Mitchell Architects has thrown its hat into the ring, submitting a speculative proposal to the government’s Hammersmith Bridge Taskforce, Hammersmith & Fulham Council and Richmond upon Thames Council. Its design involves a new structure being interwoven with the old, without touching it, to provide support for a new roadway. Two new cycle highways would sit either side of the old bridge, starting and ending on the towpaths. A temporary floating island beneath the center of the bridge would provide support for cranes and incomplete structures during the building process, with barges docking here with construction materials. The practice estimates the cost of construction, which would take two years, to be £110M excluding VAT, fees and legal costs.

It proposes that the existing bridge would close during construction for up to six hours a day between 9.30am and 3.30pm to match the school day, with full closure days planned in advance to coincide, where possible, with school holidays. Baynes and Mitchell director Peter Baynes said: “The loss of Hammersmith Bridge as a fully-functioning route across the Thames is sad and we have been studying the challenges of restoring it for some time, wondering what I could do to break the stalemate. You can continue to repair and strengthen the old bridge, or you can replace it with a new one. But what if the answer is something more innovative – weaving new and old structures together to make a river crossing for the future? We are very proud of our concept which now goes way beyond a conversation starter.”

The proposal was drawn up with advice from consulting engineer Michael Hadi Associates. Director Michael Hadi said: ‘We are very excited about engaging with residents, businesses and schools on both sides of the river and to be involved in the discussion to [ensure] the long-term future of this much-loved piece of London’s heritage. Our team’s solution offers the best value and fastest approach to reopening the bridge. It is legible as a modern intervention, offering a gentle helping hand to the retained 19th-century fabric.”

A Hammersmith & Fulham Council spokesperson said: “Hammersmith Bridge is a unique Grade II*-listed structure and one of the oldest mechanical suspension bridges in the world. We have assembled a team of world-leading engineers who are pioneering innovative solutions that will restore this important river crossing and national historic landmark. It is a hugely complex issue. When we see the detail of the Baynes and Mitchell design, we will consider it.” 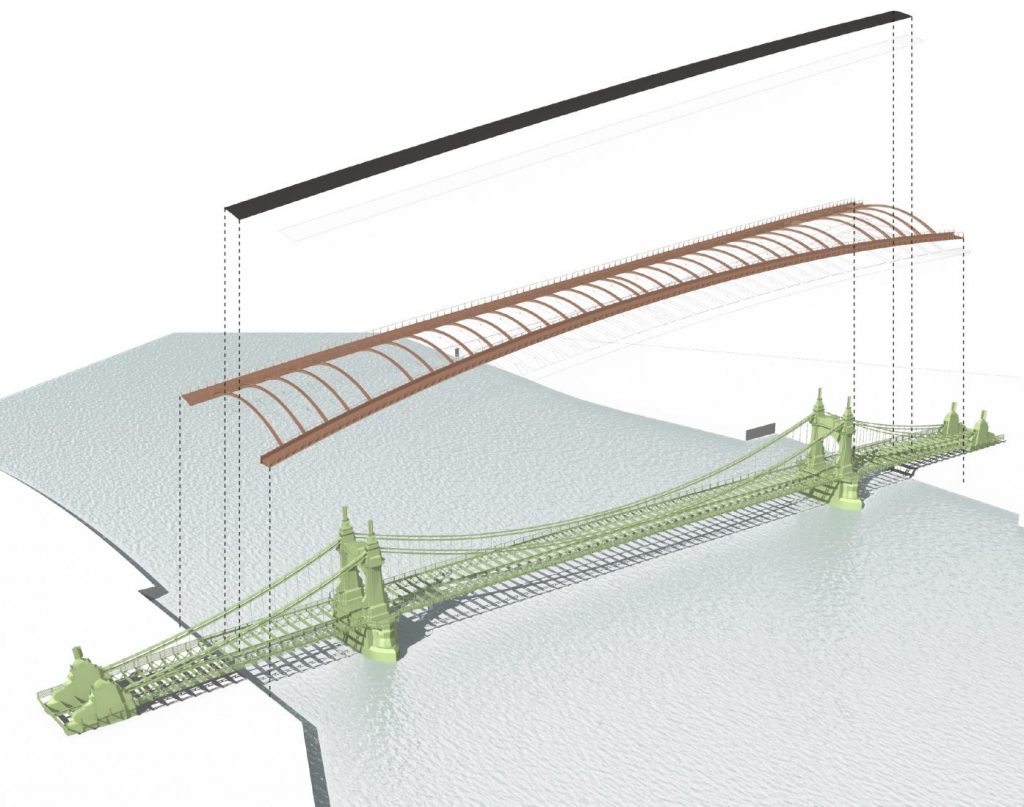