‘Dubailand’, an entertainment complex currently being built in Dubai, is a vivid example of the city’s vision to not only attract millions of tourists, but also offer its residents a world-class recreation experience. Announced in 2003 but put on hold for a long time due to global recession and Dubai's financial crisis, the project is one of the most ambitious leisure developments ever proposed anywhere in the world. It will host various residential, sports, leisure, entertainment and shopping attractions, some of which are already operational, while the whole complex is expected to open before Expo 2020.

Located just 25 minutes from Dubai International airport, â€˜Dubailandâ€™ spreads over an area of 278 km2  (107 sq mi), having two times the size of the Walt Disney World Resort.  With 45 mega projects and 200 sub projects, it will be the worldâ€™s largest collection of theme parks (although no single one of them will surpass Disneyâ€™s Animal Kingdom at Walt Disney World Resort as the world's largest theme park), and it will be divided into six main zones called worlds:

The complex, owned by Tatweer (which belongs to Dubai Holding), originally had a budget of $64.3 billion, whereas updates in 2013 show that $55 billion has been raised towards the works.

Duibailand will also contain the largest public park in the country, stretching across 1,430,000 m2, currently under construction as well. Having almost the size of Londonâ€™s Hyde Park, and being three times bigger than Dubaiâ€™s Zabeel ParkHussain, the new park, once completed, will increase public space in Dubai by 17%. While Dubai Municipality seeks to achieve a density for the city as a whole of 12.5 m2 of public parks per person, targeting the highest international standards, Nasser Lootah, director general of Dubai Municipality, said the project will also meet the highest levels of sustainability and raise environmental awareness among its visitors. 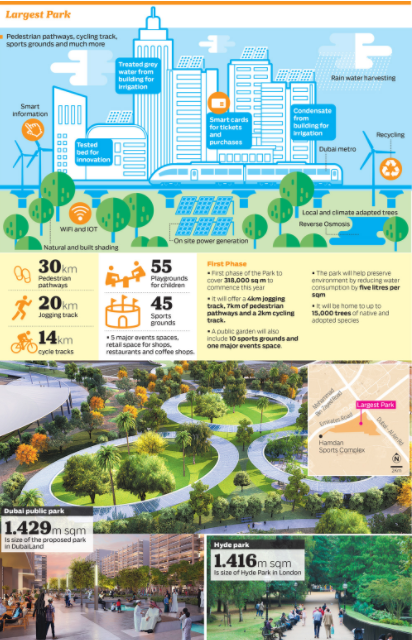