A signature, prefabricated double-arch steel bridge (“Eternity Arch”), which will be part of the Cross Bay Link, Tseung Kwan O, was erected on February 26th 2021 in Hong Kong. Upon completion, it will be the steel arch bridge with the longest span in Hong Kong.

The Cross Bay Link provides a double, two-lane connection of approximately 1.8 km long between the under construction Tseung Kwan O – Lam Tin Tunnel in the west and the existing Wan Po Road in the east (see figure below). Overall, the project scope of the Cross Bay Link comprises of: 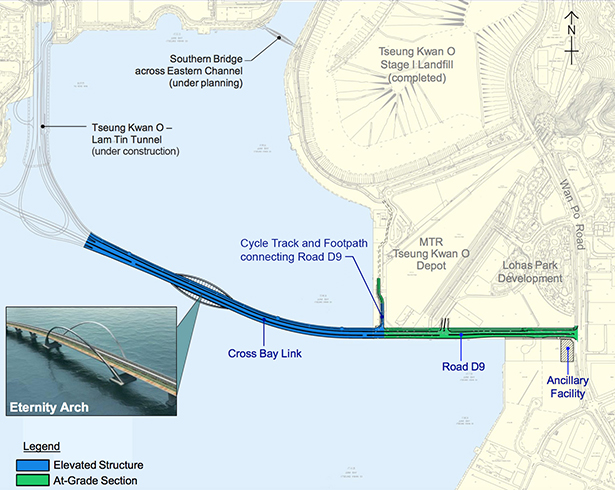 The landmark prefabricated double-arch steel bridge, which weighs over 10,000 tons, was erected using the “float-over method.” Kan Jun, director of the China Road and Bridge Corporation (contractor of the main bridge) stated that this is the first time that the “float-over method” has been applied in China. Moreover, the project team adopted off-site fabrication and assembly of the bridge.  The steel bridge components were prefabricated on the mainland and then delivered to Hong Kong on February 16 for on-site installation. The construction method also considered the local tidal conditions.

Architecturally, an “Eternity Arch” comprised of two leaning arches and narrowing piers forming an inter-connected ring was adopted for the bridge. When being viewed from the shores, the bridge appears as the mathematical symbol of infinity.

In the video below you can watch the erected “Eternity Arch” bridge.

For the second time within a year, the London landmark Tower Bridge stuck open due to a technical failure

For the second time within a year, after a mechan...

Engineers developing the framework of a three-level system of inspection

After the devastating collapse of the Surfside co...