Real time record of seismic displacements between floors of multistory buildings is now possible thanks to light-sensitive optical sensors. The new technology is called Discrete Diode Position Sensors (DDPS) and was developed at Berkeley Lab, Lawrence Livermore National Laboratory in collaboration with the University of Nevada-Reno.

Laser rays, emitting from the ceiling of each floor, shine down onto a sensor pad, placed on the floor. During an earthquake, the ceiling moves over the floor and subsequently, the laser, installed on the ceiling, moves relative to the sensor pad. This new technology achieves the direct and accurate measurement of the structural drift of each story of a building, something that is crucial for the damage assessments of multistory buildings as well as critical infrastructure (e.g. hospitals, airports) after a severe earthquake.

After a strong earthquake, engineers, typically, have to assess the stability and the safety of the buildings, which is considered to be a time-consuming procedure. Moreover, it is common that the damage of the structure is not obvious. Amar Rahman, risk engineer at Zurich Insurance Group, points out that inter-story drift may be an indicator of non-structural damage — broken elements hidden behind walls and in ceilings, such as cracked water pipes and faulty electrical systems — which is often impossible to assess and may only show up after a few weeks. Finding and repairing these issues as soon as possible will keep them from spiraling to even bigger problems down the road.

Currently, monitoring of the deformations of a building due to an earthquake typically includes accelerometers, which cannot provide real-time movement of the building but only information on how the building is moving during the earthquake incident. Considering the frequency limitations of the accelerometer’s sensors, the processing of the accelerometer data to estimate structural drifts, especially when buildings exhibit permanent deformations, is difficult. The DDPS technology can measure instantly the movement of each story of a building relative to another and inform the residents in real time about the results via smartphone app, in order to evacuate, if needed. 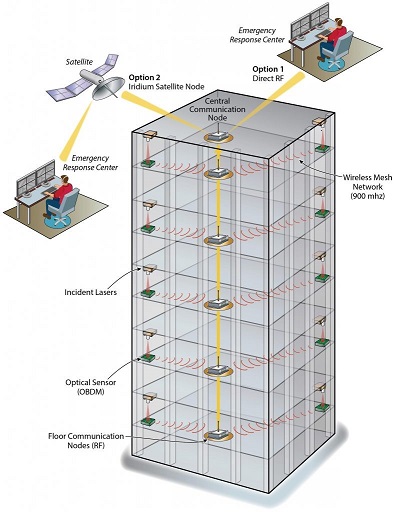 The DDPS system was developed by scientists and engineers at Berkeley Lab and the University of Nevada-Reno during a span of four years. The technology was put to test when a three-story building frame, equipped with the laser-based sensor system, was tested in the laboratory. The sensors remained intact and fully functional, even after being subjected to a variety of earthquakes scenarios. The findings of the research have been published in Engineering Structures journal.

Part of a bridge collapsed in Assam's Baksa distr...