A massive earthquake struck Haiti on Saturday August 14th, at 12:29 p.m. GMT, with 7.2 magnitude. The earthquake was about 12 kilometers (7.5 miles) northeast of Saint-Louis-du-Sud and 10 kilometers deep, according to the US Geological Survey (USGS). Until now the authorities have announced at least 1,297 deaths. There are thousands injured people while hundreds are still missing.

As the officials said, there is a major concern for the worst-hit areas from the quake because of the upcoming Tropical storm Grace, which is expected to lash Haiti with heavy rainfall on Monday. Some 75 to 100 milliliters of rainfall was expected, which may trigger landslides and cause some rivers to flood, Haiti's Civil Protection Agency said. Due to those facts authorities raced to bring the doctors as soon as possible.

In the northwestern city of Jeremie, another badly hit area, doctors treated injured patients on hospital stretchers underneath trees and on mattresses by the side of the road, as healthcare centers have run out of space.

The 7.2 magnitude quake on Saturday destroyed thousands of homes and buildings in a Caribbean nation. Southwestern Haiti bore the brunt of the blow, especially in the region in and around the town of Les Cayes. Haiti's Civil Protection Agency said the toll from the disaster had climbed to 1,297 and the hospitals that were still functioning were struggling to cope as some 5,700 people were injured.

"We do have a serious issue," Jerry Chandler, the head of Haiti's Civil Protection Agency, told Reuters.

There are very important facilities that are dysfunctional as we speak and those that are functional are receiving an overflow of patients," he said.

Churches, hotels, hospitals and schools were badly damaged or destroyed, while the walls of a prison were rent open by the violent shudders that convulsed Haiti. Some 13,694 houses were destroyed, the civil protection agency said, suggesting the toll could rise further.

In Les Cayes, a seafront town of some 90,000 people, rescuers in red hard hats and blue overalls pulled bodies from the tangled wreckage of one building, as a yellow mechanical excavator nearby helped to shift the rubble.

Haiti's Prime Minister Ariel Henry, who flew to visit Les Cayes, praised the dignity shown by people there even in the midst of their suffering.

"They are affected but resilient. They fight to survive," he said, thanking international agencies and foreign governments for their support.

However, Haiti's government appealed to aid organizations against setting up makeshift camps and urged them to work through the planning ministry, an apparent attempt to avoid the mistakes made following the devastating 2010 earthquake that killed tens of thousands of people.

Thousands of people sleeping in the streets would be exposed to the torrential rains amid a rising risk of water-borne diseases, said Chandler, the head of the agency.

The death toll is expected to rise as telephone network has been down in more remote areas. In difficult-to-reach villages many houses were fragile and built on slopes vulnerable to landslides, said Alix Percinthe, from the ActionAid charity.

He said one local leader had informed him there were 47 deaths in his area not yet reported to regional authorities.

Access to the worst-hit areas was complicated by a deterioration in law and order that has left key access roads in parts of Haiti in the hands of gangs. In a video posted on social media, one gang leader said the armed groups had declared a truce along the route to Les Cayes. 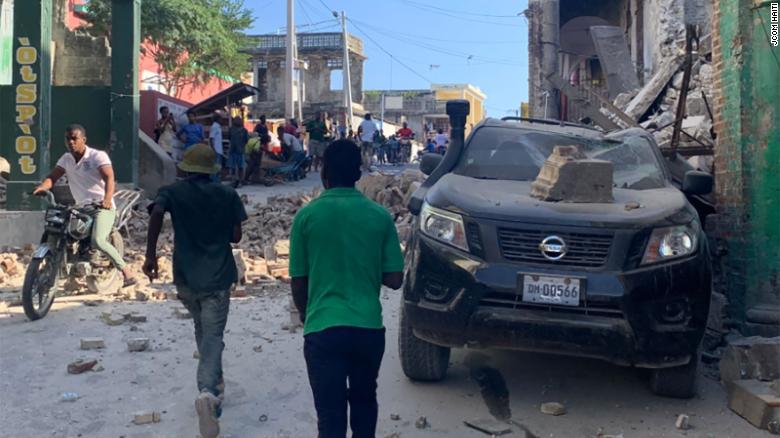